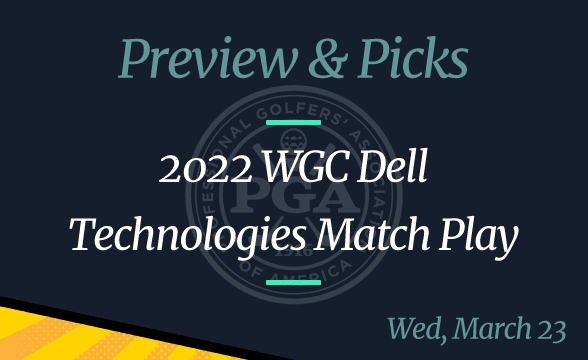 It’s time for the first World Golf Championships event of the year. The event in question is the 2022 WGC Dell Technologies Match Play, which tees off Wednesday, March 23 from Austin, Texas. Sixty-four golfers are in the competition for the title, including such greats as Jon Rahm, Justin Thomas, Viktor Hovland, and many others.

Billy Horschel is also coming to Texas, where he’ll try to defend his WGC title from last year. He won it in 2021 after beating Scottie Scheffler in the final, the man who is also on the entry list for this year’s event.

Jon Rahm Seen as the #1 Favorite

The no.1 player in the Official World Golf Rankings is seen as the main favorite to win the title at the 2022 WGC Match Play. The odds on Jon Rahm are +1100, suggesting that he will have to work hard to get ahold of the main prize.

The reason behind this is that Rahm hasn’t been playing at his best level since the start of the year. In fact, we saw the Spanish golfer make some big mistakes in his previous two tournaments – THE PLAYERS Championship and Arnold Palmer Invitational.

Another reason why the Rahm odds are not shorter is that he’s still without a single title win this year.

Justin Thomas is the second favorite, followed by Viktor Hovland. Both golfers have been doing okay in 2022, meaning that it wouldn’t be a major surprise if we saw one of them win the event.

Just behind them is Scottie Scheffler, the man who won the last year’s tournament. If he manages to retain the title for another year, he will join Tiger Woods as the only golfers who managed to win two consecutive WGC Match Play tournaments.

Collin Morikawa has the same odds as Scheffler, which isn’t surprising as the 25-year-old American is among title favorites in every tournament he takes part in. Actually, one may argue that it’s a surprise that Morikawa’s odds aren’t even shorter.

At +1600 Morikawa looks like a fantastic bet. The world no.2 golfer has already played six PGA tournaments this season, finishing in the top 10 in four of those. He’s also played two European tournaments this year, although he didn’t do too well.

Still, generally speaking, Morikawa has been pretty decent in the last couple of months and considering that he’s still without a title this year, you can be sure he will take the next event very seriously.

Swedish Newspaper's Games Violated the Gaming Act in the Country