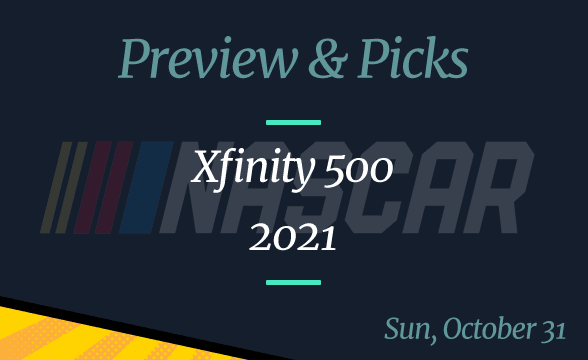 NASCAR will be heading to Martinsville, Virginia this weekend for the Xfinity 500 race, with just a couple more events left on the season. The Sunday race will feature the winner of Hollywood 400 with Kyle Larson coming off his ninth victory this season at Kansas last week and delivering on a sterling performance.

Yet, Larson doesn’t seem to be tipped to win at Xfinity 500 as Martin Truex Jr. is the one to actually have the upper hand at the Martinsville Speedway. Whether oddsmakers get this right is one thing, as the odds are treading the needle with just a marginal difference between the top five racers.

The 2021 NASCAR Xfinity will be broadcast on NBC. The event is taking place at the Martinsville Speedway on Sunday, October 31 at 2:00 pm ET.

The oddsmakers have an interesting forecast for the upcoming race this Sunday. Larson is sitting atop the NASCAR Cup Series with a total of 4181 points, but Martin Truex Jr appears to be the one given the best chance of winning at Martinsville Speedway at (+450).

Truex Jr. is 6th in the overall standings with four-season wins so far and a total of 4071. With only two races on the circuit, it’s hardly plausible that Truex Jr. would win the Cup Series this year, but he might as well gun for a win during the weekend’s event.

As it stands, Truex Jr. Is the fastest of all Joe Gibbs Racing drivers and he has posted three of his seasonal wins over the course of his last seven races. At a time when his opponents have started to slump, he has peaked and that is noticeable of his 5.71 average finish. He has been able to push his overall numbers of laps led as well making him a serious contender.

But far more importantly, Martin has won three out of his four last races at Martinsville which makes him one of the best competitors in the Speedway. In fact, if it hadn’t been for a loose wheel in 2020, he might have been four for four.

The stakes will be high for Larson posted at (+500). The driver is not so far ahead just yet and he will be looking for a first-place finisher here as he needs the points to consolidate his lead ahead of Elliott and Hamlin. Both drivers are posted at (+600) and (+650) which means we will see a lot of action coming from their corner as well.

Who Else Is Vying for a Top Spot?

Another driver you may want to back up at the Martinsville Speedway is Joey Logano who has (+850). He has posted six Top-10 finishes and one win in his last seven races, which definitely makes him a good fit to bet on.

Granted, Logano has no chance of bringing home the Cup Series, but he might yet throw a spanner in Larson and Truex’s plans this Sunday. A very long shot here is Christopher Bell (+2000) who has mostly been pressing on and finished Top-10 in his last four races.

However, betting on him outright here would be a bit much. You can still look for some alternative odds, though, and check out the lines for Top-3 and Top-5 finishes here.