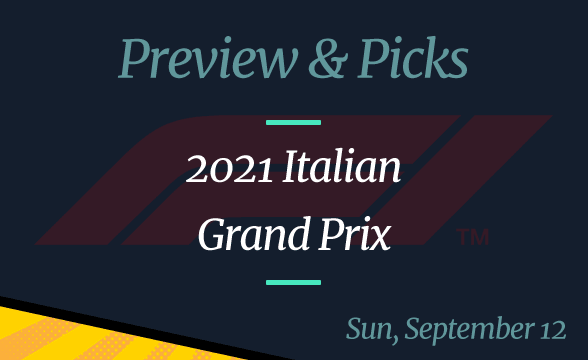 The Dutch GP turned out to be a success but that once again pitted Max Verstappen against the previously unbeatable Lewis Hamilton who was consigned the second spot in the race. Now, though, Verstappen and Hamilton are prepared to renew their rivalry in the Italian Grand Prix that is going to be held on Sunday at the Autodromo Nazionale di Monza at 9:00 am EST. The dramatic Belgium event really had both drivers on edge and more so Hamilton than Verstappen.

As Verstappen praised away another victory during the Dutch GP he is also 3 points ahead of Hamilton in the overall standing with 224.5 and 221.5 respectively. What happens next will be determined at the 2021 Italian Grand Prix and here are the odds in what seems to be an almost two-man race.

Where and When to Watch 2021 Italian Grand Prix

The last two seasons of F1 really have come down to these two racers. While Hamilton did very well in the last season with Verstappen struggling to keep up, the tables have turned now and Max has found a way to not only put up a fight but also best Hamilton.

Of course, there are no guarantees that Verstappen will win this year’s title even though he has been leading most of the season. He was behind Hamilton in the overall standings most recently, but the win at the Grand Prix GP put him back on top. He pulled out ahead of Hamilton in 62 out of 72 laps during the previous event.

Hamilton still blames the Belgium GP for much of his present predicament with the race only finishing a few laps into the event due to poor weather conditions. Nevertheless, Hamilton is returning to Italy with one clear intention in mind – regaining the F1 lead and winning the cup. There are some nine-odd races left on the F1 to go and Italy can prove another decisive moment.

The only real issue for Hamilton would be securing the first place. Hamilton has been showing his usual effortlessness in staying ahead of the pack and close to the first position, but he himself has not been able to make it through to first place. Has he lost confidence or is the competition he is facing now much more cut-throat.

Struggling to Climb the Pecking Order

You have a number of other drivers who have been doing well but not nearly as well as Hamilton or Verstappen. Valtteri Bottas is third in the overall standing with merely 123 points followed by Londo Norris with 114.

Bottas is still quite young and he may yet prove his worth in the F1. The truth though is that he has had a disappointing season so far, but not so much as he keeps third in the overall standing. He is coming on a high note in the race after finishing third in the Dutch GP and he will be looking for another good performance.

Anderson Silva vs Tito Ortiz Odds, Date, Time and Where to Watch