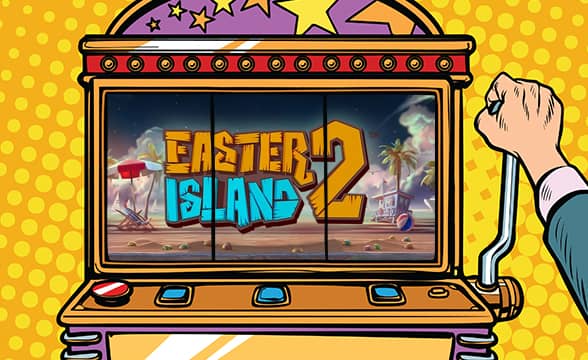 Leading worldwide gambling content publisher, Yggdrasil, announced today that it launched Easter Island 2, a prequel to the highly popular slot game. In Easter Island 2, the company brought back the two hilarious Moai statues. The game features symbols that the players already know from the first game. However, Easter Island 2 offers an updated theme, which takes the title to a new level.

“Easter Island™ 2 will see players enjoying every step with our favorite characters from a classic and well-loved Yggdrasil title.”

Yggdrasil’s chief of gaming and development, Asko Heiskanen, acknowledged that the Moai are back and full of action. Furthermore, he revealed that every win in Easter Island 2 triggers a respin, which can bring exceptional rewards for the players.

Heiskanen added that by matching six-of-a-kind symbols, players can expand the reels. This brings an 8×6 matrix, featuring 55 pay lines and players may win more and bigger prizes. Furthermore, he acknowledged that the game was designed in a user-friendly way. This means that customers, who want to play on mobile devices, can use portrait mode.

Yggdrasil’s Easter Island 2 features a relaxing beach vacation theme. The game places the familiar statue duo and their bird friend at a beach, where they are surrounded by sand, parasols, and palm trees. Although the theme of the game is relaxing, Easter Island 2 provides the players with exciting gameplay options and great prizes.

Winning a spin awards the player with a Symbol Swap Respin. As a result, the winning symbol replaces all low-playing equivalents, which increases the potential to win during respins. Furthermore, winning four, five, or six in a row awards the player a “colossal symbol“, which leads to larger symbols with bigger prizes. Last but not least, players can also hit a “wild colossal symbol” on any spin, which leads to big cash prizes.

Softweave to Introduce Winafar in the Canadian Market

Digital entertainment and online media company Interactive Gaming Group has inked a strategic partnership with Team Singularity – a professional Danish esports organization. The move is a part of IGG’s vision to expand on the esports market.  IGG and Team Singularity Enter a Partnership IGG is a big gaming brand that currently has more than 1,000 iGaming content creators […]

It was announced that Aaron Speach, the chief executive officer of the leading global esports tech and betting provider Esports Technologies, will hold a speech where he will address the company’s state of affairs and future plans.  Speach to Address the Company’s Shareholders and Investors Speach’s panel is scheduled to take place on January 14 […]

Betby will help Esports Entertainment Group to power its betting brands Vie.bet and SportNation. Betby, which is an expert in supplying state-of-the-art solutions for the interactive wagering vertical, is well-versed in the esports and sports betting space. Betby and EEG Are Familiar Partners The deal is an extension of the collaboration between the two companies […]

RAW iGaming, a young and innovative slot games developer, has added two industry experts to its leadership team in order to accelerate its growth. The ones up to the tasks at hand are Ricardo Ruiz and Henrik Fagerlund – two seasoned iGaming experts. RAW is Joined by Two Veterans Ruiz has years of experience on […]

Climate change, carbon emissions, and net-zero carbon footprint are regular terms heard these days. They aren’t always associated with the gaming industry, however. That’s changing, and IGT has joined the Science Based Targets Initiative (SBTi) program to strengthen its ESG (environmental, social, and governance) operations. This initiative aims to reduce carbon emissions and combat climate […]

Vivo Gaming, the leading live casino software provider announced that it appointed Martin Hodges as the company’s new marketing director. Martin Hodges Joins Vivo Gaming as Marketing Director Spending more than 11 years as a part of the iGaming industry, Hodges undoubtedly has an array of skills that will help him in his new position. […]

Platform-as-a-Service (PaaS) company Snipp announced that it agreed to acquire Gambit, the leading consumer network pioneer in integrating loyalty programs with sports betting and online gaming in the US. Snipp Agrees to Acquire Gambit Rewards for $5M The acquisition of Gambit includes its wholly-owned subsidiary, Gambit Rewards. Launched in 2019, the company’s unique loyalty program […]

Ourgame Goes After Former Director over Debt and Loans

Ourgame International Holdings Ltd has brought legal action against a company’s former director over the unmet loan and debt obligations. The total amount of the owed sum is estimated at $12.6 million. Director Faces Legal Proceedings from Former Company As a result, the company has been forced to file a civil complaint against Fu Qiang […]

Digital sports media company Playmaker announced on Tuesday that it acquired Cracks, the leading Mexico-based video-first sports platform. Playmaker Acquires 100% Of Cracks for $1.7M The acquisition with an aggregate consideration of up to $1.7 million marks an important step for Playmaker that expands its content suite. Founded by Manuel Bravo, Cracks is one of […]

The Fourth annual Esports Survey Report based on the research of law firm Foley & Lardner in collaboration with Sports Business Journal (SBJ) and The Esports Observer (TEO) is in and the results promise a bullish year ahead for competitive video gaming. Esports Outlook Remains Positive for 2022 Carried out among 430 professionals on all […]

Super Group Announces It Has Met Its H2 2021 Targets

Super Group, the ownership company of the global online gambling company Betway, has revealed that it has met the forecasts for the second half of 2021 it had made in August. The announcement comes just before Super Group’s planned initial public offering. Super Group’s IPO and August Forecast Despite a few setbacks, Super Group has […]