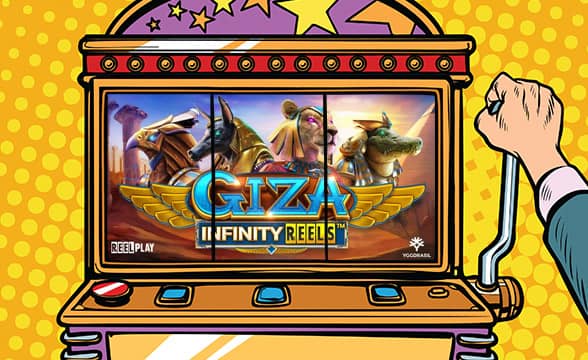 Featuring the Great Pyramid of Giza, one of the most iconic Egyptian landmarks, ReelPlay delivers an innovative and entertaining sound and video experience offering a wide variety of playing options. GIZA offers an endless amount of new reels, each of them adding to the slot’s multiplier. Players will therefore be able to reach for bigger prizes with each spin. Back-to-back wins will also increase the multiplier. The fifteenth reel will bring customers closer to the Jackpot Prize, 888 times the total bet on top of prizes already won.

This new release was entirely launched via Yggdrasil’s GATI technology, which offers developers a fully standardized toolkit to produce readily regulated titles and a stable environment. The technology is used by all partners of YG Masters, Yggdrasil’s game development program.

Yggdrasil gives its partners full access to its global network, fast-tracking the distribution of new content and increasing their growth potential.

It announced today the launch of Thor Infinity Reels across all LeoVegas platforms on February 8.

With an extensive network of strong partners and a rich portfolio of highly acclaimed games like King Kong Cash, Monopoly Megaways, Goldfish, or Mega Jackpots Wheel of Fortune on Air, Playson is one of the leading software developers in the industry. Its Timeless Fruit Slots portfolio consisting of titles like Rich Diamond, Fruit Megaways, or […]

Top-tier gaming software developer iSoftBet known for blockbuster slots like Rambo, Moriarty Megaways, Brides of Dracula: Hold & Win, Bewitched, and Lucky Clover has recently announced the expansion of its award-winning lineup with a new Hold & Win game. The provider that is also known as a powerful content aggregator in the industry has released […]

Sportradar, a business-to-business multinational sports data and technology provider, is bringing some fresh blood to its leadership by acquiring the experienced business executive Andrew Bimson as its new chief operating officer for North America. Bimson Becomes the New COO of Sportradar Bimson joins Sportradar as the company seeks to scale up its advertisement business, its […]

The Madrid-based operator Nueva Codere, formerly known as Grupo Codere, has decided to appoint a new non-executive chairman in the wake of a major inner restructuring. The one up to the task is Christopher Bell, a seasoned industry veteran who has served the betting industry for three decades. Christopher Bell Will Bring In 3 Decades […]

Las Vegas-based Esports Technologies is looking for a successful 2022. The company, which provides esports betting options for operators, is confident that a number of recent strategic moves will continue to propel it upward. By the end of the current fiscal year in September, its revenue will have reached $70 million, according to a company […]

Malta-based Nasdaq-listed online publisher Raketech Group Holding PLC (Raketech) has announced the nomination of two new managing directors. The new senior management board members will be responsible for overseeing the company’s operations in Malta and the US. The appointments are a result of Raketech’s desire to see its commercial objectives for 2022 grow at a […]

Business-to-business betting platform Novusbet has entered into a new partnership with Oddin.gg, an esteemed provider of betting solutions for the competitive video gaming segment, or esports.  As a result, Novusbet will benefit from Oddin’s advanced esports wagering solutions that will allow it to get a foothold in the rapidly expanding esports vertical. Bringing More Esports […]

Parimatch has struck a new content partnership with BETER Live for the latter’s portfolio of live casino games. As a result, Parimatch will benefit from numerous additions to its own iGaming website, with games such as roulette, blackjack, top card, and baccarat all part of the available library now. BETER Live Drives Foray in Live […]