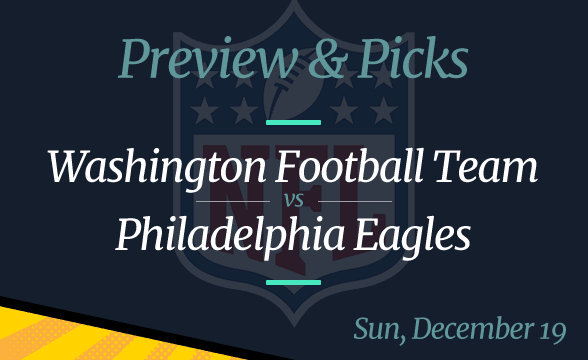 Both the Washington Football team and the Philadelphia Eagles are 6-7 on the season, meaning that they still have a chance to book a spot in the playoffs. The two NFC East rivals will meet twice by the end of the regular season and the outcome of those games could decide which team goes to the postseason.

The first of those two WFT vs Eagles games is on the program on Sunday, December 19 at Lincoln Financial Field in Philly. If you take a look at the betting odds, you’ll see that the hosts are expected to win the Week 15 game.

All odds are per FanDuel as of December 14.

Injury Problems Pilling Up for Washington

Last weekend, Washington lost to the Dallas Cowboys at home. The score was 27-20 for the Cowboys, which wasn’t much of a surprise as they came to Landover as betting favorites.

The WFT fans probably aren’t too much bothered about that defeat. However, what happened to a couple of their key players in that game surely bothers them.

Their starting quarterback Taylor Heinicke suffered a knee injury, for which he had to leave the field in the early stages of the fourth quarter. After getting an MRI scan on Monday, the quarterback is very likely to return in time for the clash with Philadelphia. Still, he probably isn’t going to be at his best.

Heinicke wasn’t the only one to get injured against Dallas. The same happened to Washington’s leading receiver, Terry McLaurin who suffered a head injury. At the moment of writing, McLaurin remains doubtful for Week 15.

As if those two injuries weren’t enough, more problems hit Washington this week. A total of four players were added to the WFT Covid-19 list, including one of their best defenders, defensive tackle Jonathan Allen.

If the Eagles win in Week 15, their chances of getting a Wild Card berth will improve significantly. It’s because they have a relatively easy game in Week 16 against the New York Giants who have nothing to fight for.

If the Eagles win on Sunday, they will make it almost impossible for the WFT to get to the postseason. In fact, it would probably mean that by their second game of the season, in Week 17, Washington would be written off from the playoff race.

In the final game of the regular season, the Eagles welcome the Cowboys at the Linc. Dallas will probably get the job done by then, so we could see the Cowboys letting their backups play in Philly.

Knowing all this, you can see why the Eagles are feeling good about their playoff prospects. They surely have the motivation to beat Washington, but do they have the quality to achieve that plan?

Their recent run suggests they have. This team’s won three of their previous four games. Furthermore, the last time they played in Philadelphia, the Eagles beat favored New Orleans Saints 40-29.

Picks: Philadelphia Eagles to win and cover the spread; over should hit