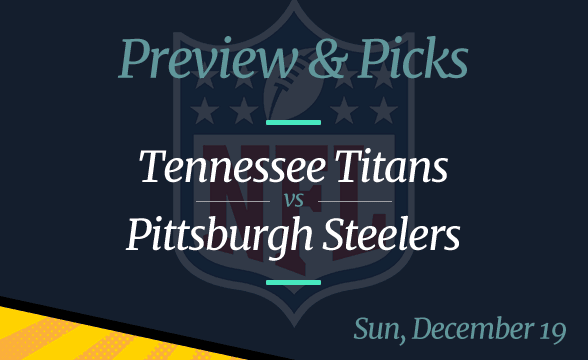 Even though the Tennessee Titans (9-4) and Pittsburgh Steelers (6-6-1) play in different divisions, their games are considered a fierce rivalry. Their Week 15 clash on Sunday afternoon is supposed to be extra exciting as both teams are hungry for a win.

With a win, the Titans would pretty much secure a place in the playoffs. When it comes to the Steelers, the playoff picture is such that they still have a chance to get a Wild Card berth. Their chance would get much, much better if they managed to win on Sunday.

All odds are per DraftKings as of December 13.

Titans are Back on the Winning Track

After two straight losses in the second half of December, the Titans are back in the winning mode. In Week 14, they destroyed the Jacksonville Jaguars 20-0.

Obviously, their defense was terrific in that game. Still, that’s not just because the Titans did well, but also because the Jaguars were horrible.

When it comes to the Titans’ offense, they didn’t do that great in Week 14. They scored only 20 points, from two touchdowns, three field goals, and one extra point.

What’s interesting is that their passing game was pretty disappointing, while their rushing game was excellent.

Running back D’Onta Foreman, who’s been getting playing time since Derrick Henry’s injury, was great against the Jaguars, making 13 carries for 47 yards and one touchdown. The other touchdown was scored by quarterback Ryan Tannehill.

Steelers Desperate for a Win

The Steelers need a win ASAP if they wish to challenge a Wild Card berth. Their win percentage is .500 at the moment, meaning that they still have a chance to get to the postseason. For that to happen, however, they need a few more wins.

The problem is that they got some pretty tough games in the remainder of the season. After the game with the Titans, they play against the following teams:

Another, even bigger problem for the Steelers is that they seem completely out of shape. This team is 1-3-1 in the past five games, with their most recent game being a loss to the Minnesota Vikings (36-28).

On the bright side, the Steelers are without a loss at Heinz Field since September. Further, they are 5-0 against the Titans since 2013.

These facts might be giving them some hope ahead of Week 15, but that probably isn’t going to mean much on the field. Instead, the Steelers are likely heading towards their seventh loss of the season.

Picks: Tennessee Titans to win and cover the spread; under to hit