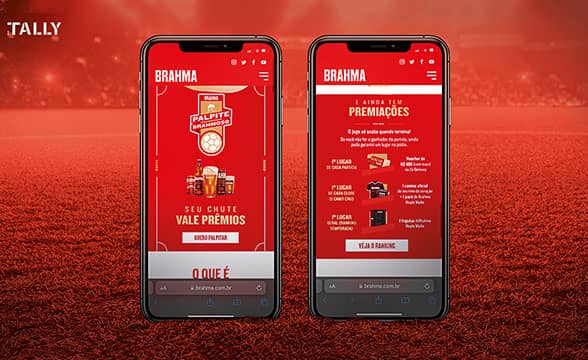 Provider of top-tier fan engagement solutions Tally Technology has inked a long-term partnership deal with AB InBev’s subsidiary Ambev. According to the agreement, Tally Technology will offer its prediction games to top-tier soccer clubs in Brazil Cruzeiro and Atlético Mineiro.

The new deal is the result of a successful test period during which the Brazilian brewing company efficiently used Tally Technology’s predictions game to engage with fans during the Minas Gerais state championship final played between Cruzeiro and Atlético. The test’s success convinced more than 4,000 players to register right after the game went live.

This convinced Tally Technology to go ahead with the launch of a product that covered the matches played by both Brazilian clubs in June 2022. Ambev designed a bespoke brand and developed a landing page that allowed players to choose the games they would like to predict, using data collected from fans during the contests. The program also featured a special 30% discount for their first home delivery order for beer.

Tally Technology’s chief executive officer Brad Vettese spoke about Brazilian fans who are famous for their devotion to sports, further explaining the decision to seal the new deal with “a brand on the scale of Ambev” in an attempt to cater to the needs of a “large, highly committed, and energetic community.” Ambev and Tally Technology first started working together when the latter was selected as the winner of the Golaço Challenge for start-ups one year ago. Ever since, Ambev has continued to express its faith in Tally, continuously offering a one-of-a-kind fan engagement environment and a strong data tool for the years to come. Tally Technology is determined to add even more championships and clubs to its already impressive roster that includes the Los Angeles Rams, the Lakers, the Buffalo Bills, and Atlanta Hawks.

Ambev’s Barbara Mundin explained that, as sponsors of top-tier sporting events in the country, the company is constantly searching for fresh ways of creating new relationships with the “hugely engaged, passionate fan communities” in the region. Noticing Tally Technology’s evolution after winning the Golaço Challenge and the success of their fan engagement platform, Ambev decided to deliver a predictions game that would be fun and easy to play for soccer aficionados.

At the start of the month, Tally Technology welcomed Juli Ferre Nadal to its crew. With many years of professional soccer experience under his belt, Ferre Nadal will engage sports lovers with fresh prediction games.