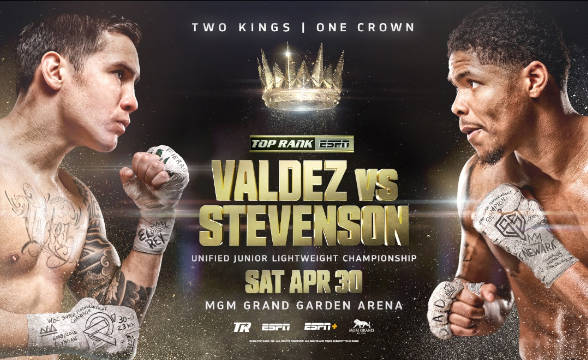 MGM Grand Garden Arena in Vegas will serve as the venue for a super featherweight title unification fight between Shakur Stevenson and Oscar Valdez. Stevenson has the WBO gold in his possession, while Valdez is putting his WBC championship on the table. Further, the two also fight for the vacant Ring Magazine title.

Another interesting fact is that both boxers know no defeats in their professional careers. Stevenson is 17-0, while Valdez has a 30-0 record. For one of them, the undefeated run comes to an end on Saturday, April 30.

With so much at stake, you can be sure that both Stevenson and Valdez will go far and beyond to try to win on Saturday. In a fight like that, anything can happen. Still, judging by the odds, Shakur Stevenson should get himself another win.

Shakur Stevenson Might be the Next Big Thing in Boxing

The 24-year-old is without a single fight in his pro career which started in 2017. Over the last five years, he’s fought some pretty big bouts, most notably the one against Jamel Herrin last October. By beating his opponent by TKO, the Double S got himself the WBO super featherweight title.

A few months before that win, we also saw him defeat Jeremiah Nakathila. He did it by unanimous decision, grabbing the vacant WBO interim title.

Speaking of titles, Stevenson also holds a WBO title in the featherweight division, as well as three other championship belts.

With a 77% knockout-to-win ratio, Oscar Valdez is one of the best strikers in the division. The 31-year-old has won 23 fights by KO/TKO. As a result, he’s now considered one of the top pugilists in the super featherweight division. In fact, according to BoxRec, he is the best boxer in this division.

Knowing this, the obvious question is why oddsmakers see him as a +370 underdog. The explanation is that bettors are probably pouring their money on their opponent. Still, this guy definitely has the pedigree to upset the odds on Saturday.

The fact that Stevenson is priced at -600 shows that he’s a huge favorite to win in Vegas. However, surprises do happen in professional boxing. Backing his opponent sure seems like a good idea, especially knowing that he’s a knockout maestro.

UK Woman Jailed after Stealing $490,000 to Fund Her Gambling Addiction