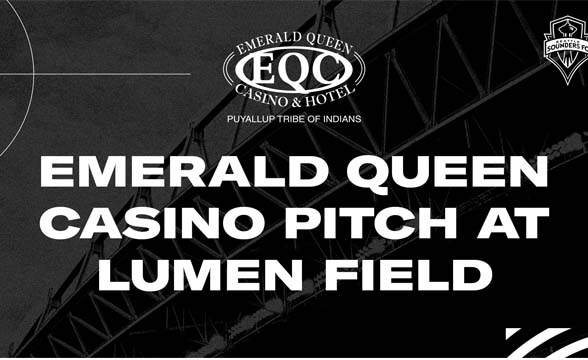 The Sounders Team Up with the Puyallup Tribe

The multi-year agreement will kick in during the match between the Sounders and Austin FC this Saturday. As per the deal, the soccer club will promote the tribe’s branding throughout the Lumen Field during its matches. Emerald Queen Casino’s logo will be put on the center circle, the player tunnel and the visitor seats.

Puyallup Tribe members will attend the match that will inaugurate the partnership, helping the Sounders boost their viewership. In addition, Connie McCloud, cultural director of the tribe, will bless the field during the game’s opening ceremony.

This is not the first agreement between Seattle Sounders FC and the Puyallup Tribe of Indians. Last year, the two parties inked a jersey sleeve sponsorship deal.

The Two Partiers Are Happy to Deepen Their Relationship

The Sounders’ president of business operations, Peter Tomozawa, spoke about the agreement with the tribe. He said that the soccer club is honored to introduce the Emerald Queen Casino Pitch and promote the Puyallup Tribe’s brand. He noted that the tribe has been a great partner so far and said that his team “couldn’t be more thrilled” to grow that partnership. Tomozawa concluded that he hopes his team’s relationship with the tribe and its casino will continue to deepen.

As an organization, Sounders FC holds our home turf in high regard, with our 133-47-44 home record as a special point of distinction. Today’s naming rights agreement brings in a partner that complements the pride and success that we want those attending matches at Lumen Field to feel, and we’re happy to continue working with the Puyallup Tribe and EQC as they support soccer in our region.

Meanwhile, the Puyallup Tribal Council released its own statement on the relationship. The tribe said that its members are proud to continue working together with the Seattle-based soccer team and are honored to see the tribe’s name and logo on the Lumen Field pitch.

The Sounders have been a joy to partner with and are committed to learning about and honoring our deep history and culture here as Puyallup people. We congratulate them for all their achievements.

The council added that the Puyallup Tribe’s impact in the region has so far been positive, as the tribe has helped many people find a job and has provided gamblers with premium entertainment. The Puyallup want to continue their commitment to excellence by working with other community leaders that share the same values as them.