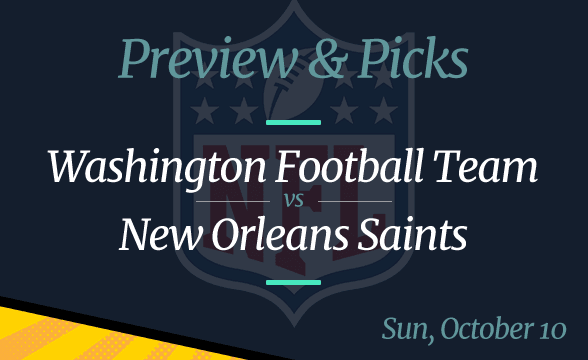 Despite a surprising overtime loss to the New York Giants in Week 4, the New Orleans Saints are coming to Landover as favorites. Oddsmakers expect them to beat the WFT, although not with a big margin, which was the case when these two met the last time.

It happened in 2018, when New Orleans destroyed Washington 43-19. However, a lot has changed since. For one, the Saints don’t have Drew Brees as their quarterback anymore. Still, his replacement, Jameis Winston, has been doing a solid job so far.

Will he continue to impress for the Saints or will the WFT find a way to deal with him? Let’s find out!

All odds are per DraftKings as October 6.

The Saints QB has been one of their best players so far in the 2021 NFL season, with a completion rate of 64 percent for a total of 613 passing yards and 8 touchdowns. Sure, he’s no Brees, but his output has been enough to take the Saints to 2-2.

They probably feel as they could’ve done even better, especially in the previous game. Last weekend, they lost to the New York Giants 27-21 after overtime.

Winston did okay in that game, completing 17 of his 23 passes for one touchdown and no interceptions. He gained 226 yards with his passes, which is Winston’s best record this season.

However, his teammates weren’t as good against the Giants. This goes especially for New Orleans’ defense.

Even though Washington is famous for its defense, its defensive stats haven’t been too great so far. However, WFT’s offense has been playing superb football so far. That sounds a bit strange, especially knowing that their starting QB Ryan Fitzpatrick has been out for several weeks due to an injury.

Still, Taylor Heinicke has done a fantastic job as his replacement, helping Washington score 34 points in their previous game. It happened last Sunday in Georgia when they beat the Atlanta Falcons by four points.

This time, they have a much tougher defense in front of them, meaning that it’s not going to be easy to score too many points. The question is can they score more than the opponents?

They might, especially knowing that they’re playing in front of their fans at FedEx Field.

Pick: New Orleans Saints to win; we might see the Under hit.