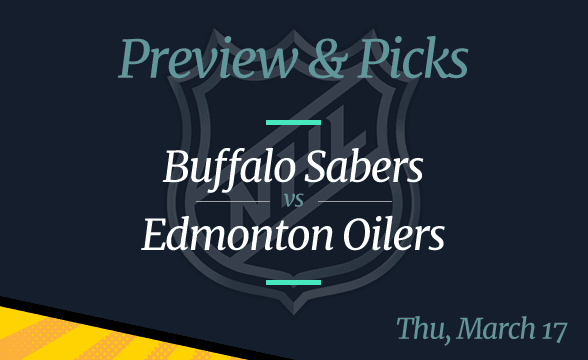 On Thursday, March 17, the Buffalo Sabres are coming to Rogers Arena, which is where they defeated the Edmonton Oilers three times in the four previous meetings. This time, however, oddsmakers think they’re going to be the ones to lose. The reason? The Oilers have been playing fantastic hockey in the 2021-22 season.

No Playoffs for the Buffalo Sabres (Once Again)

As things stand, it’s almost 100% certain that the Buffalo Sabres will not make the playoffs this year. With a 20-8-32 record, they got 48 points, which is 31 points fewer than the Boston Bruins – the closest team from the playoff zone in the Atlantic Division.

To break their playoff drought that started more than a decade ago, the Sabres would need to win most of their games in the remainder of the regular season. Their form isn’t bad, but winning 16+ games in 10 weeks seems like too much of an ask.

This goes especially for the fact that Buffalo has some pretty tough fixtures ahead, starting with the one against the Edmonton Oilers.

The Oilers Need to Keep on Winning

The Edmonton Oilers are 33-4-23 on the season, which accounts for 70 points. This puts them in the #3 position in the Pacific Division, which sure sounds good. The trouble is that there are several teams lurking behind. The Vegas Golden Knights have two points fewer, the Vancouver Canucks have three less, while the Anaheim Ducks are five points behind.

That said, in order to stay in the top 4 and book the ticket to the postseason, the Oilers need to continue playing well. So far, they’ve been doing great. They are riding on a three-game win streak, which saw them defeat the 2021 Stanley Cup winners, the Tampa Bay Lightning. It happened last Saturday when the Oilers won 4-1. Three days later, the Oilers did even better offensively, beating the Detroit Red Wins 7-5.

With Conor McDavid, Leon Draisaitl, Evander Kane, and others, the Edmonton Oilers are among the best NHL teams when the offense is concerned. The proof is that they’ve scored a total of 200 goals so far, 15 of which happened within their previous three games.

Unfortunately, they haven’t been as good in the defense, with 192 goals conceded in 60 games. The good news is that on Thursday, they’re locking horns with a team that doesn’t seem capable of taking advantage of that. Sure, the Sabres could score a goal or two, but they probably aren’t going to be able to outscore the Oilers.

Picks: Edmonton Oilers to Win and Cover the Spread; Over 6.5 Goals