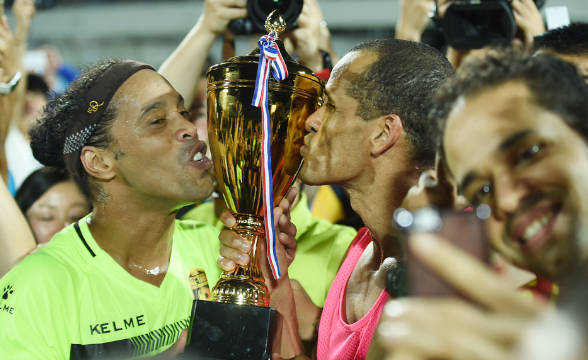 Ronaldinho Gaúcho, who is a five-time world champion with the Brazilian National Football Team and named the best player on the planet twice by FIFA, is the new ambassador of Catimba Fantasy, a new game released by the Brazilian League Catimba Scores, which paid out more than BRL 20 million ($4.3 million) in winnings last year.

The “Bruxo” Pleased with His New Role

The former Barcelona player commented that he was very happy with the partnership with Catimba Scores. He added that he wanted to continue inspiring people and share his passion for soccer. The “Bruxo” (Wizard) stated that Catimba participants should play the same way as he did when he used his abilities to make good games and get goals, victories and titles. In this way, they will get good results in their leagues. According to the Brazilian soccer star, the secret is to stay well-informed about the teams, analyze the statistics, each player’s moment, and back the perfect team.

Ronaldinho will star in a marketing campaign lending his name to the Tropa do Catimba league, which will be launched in the forthcoming weeks by the platform. The winner of the Catimba Annual League will receive the respective awards, which include even a car, from the Brazilian soccer player. Besides, from now on, the winners in different Catimba leagues will obtain as prizes balls and prizes signed by the “Bruxo”.

Catimba Fantasy, which is 100% developed in Brazil with national technology, will offer its participants to play in other leagues, apart from the Brazilian Championship A Series, also known as Brasileirão, such as Champions League, Libertadores, and national championships in Europe. In addition, the players now can use the new offer of their own statistics through Catimba Stats.

$21,625 Cash Award for the Winner in Catimba Fantasy

At Catimba, each participant chooses 11 players from the real teams, as well as the coach and five reserves, and during their disputes, the fantasy participants receive points from what occurs in real matches (results and individual performance). The winner is the participant, who receives the most points and the cash prize could reach BRL 100,000 ($21,625).

Diego Marques, chief executive officer of Catimba Scores and Catimba Fantasy, said that for the Catimba team it is a great pleasure and a dream come true to have one of the best soccer players on the team. He added that last year Catimba Scores distributed more than BRL 20 million ($ 4.3 million) in prizes and expected that the Brazilian league would grow even more with the fantasy. In September 2021, Ronaldinho became an ambassador of the bookmaker Marjosports.

Kaizen Gaming’s sports betting and iGaming subsidiary Betano has expanded its footprint in Romania. The brand has inked a partnership deal with the Romanian Football Federation, the country’s soccer authority. Betano Secures Romanian Cup Naming Rights As per the agreement, Betano will receive naming rights for the next three seasons of the Federation’s Cup. Because […]