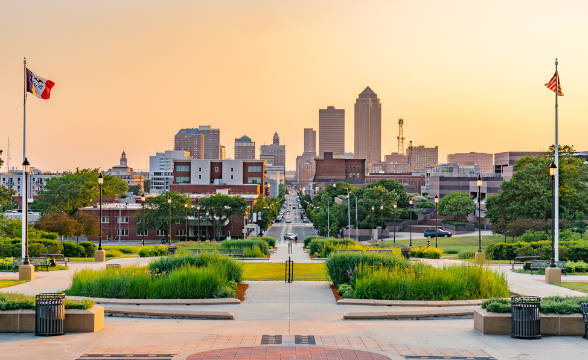 A new legislation amendment has decreed that no new casinos will open in Iowa during the next two years. By signing the new measures, Iowa governor Kim Reynolds has placed a moratorium on the issuance of new casino licenses until June 2024. This particularly affects the plans for a massive $250 million casino in Iowa’s second-biggest city, Cedar Rapids.

The change in the gambling regulations puts a limit to the number of casino licenses at 19. However, Iowa already operates 19 commercial casinos, which basically means no other licenses will be issued until the moratorium is lifted. According to Iowa Senate Republican Leader Jack Whitver, one of the main reasons for the new rules is that there is “a lot of gaming fatigue”.

Cedar Rapids mayor Tiffany O’Donnell asked governor Kim Reynolds to place a veto on the bill as it puts on hold plans for a 160,000 square feet entertainment complex at the place where the already demolished Cooper’s Mill used to be. The new complex was going to house bars, restaurants, and an entertainment center. O’Donnell expressed her determination to complete the project:

I expressed to her my disappointment and reassured her that Cedar Rapids would still be here when the moratorium is lifted in two years. The city remains committed to bringing this world-class entertainment venue to Cedar Rapids. Our citizens deserve a place to find a wide range of entertainment options and we know it will spur growth around it.

How Will Another Casino Affect the Iowa Gambling Industry?

The Iowa Racing and Gaming Commission has already denied issuing a license for a casino in Linn County two times – once in 2014 and once in 2017. The main reason was that, according to reports, such a casino would only shift the gambling revenue from existing casinos to itself and it would not generate new profits and jobs. Thus, it would have affected local charities and community projects, which benefit from part of the revenue of the local casinos. These conclusions were made by studies conducted by Spectrum Gaming Group and the Innovation Group and were presented to the commission. They showed that a new casino in Cedar Rapids would steal gross revenue of $61 million away from other Iowan casinos.