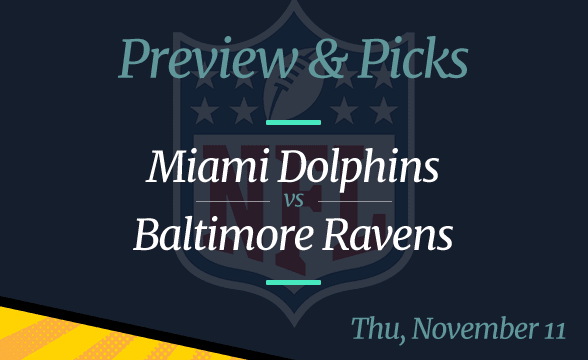 Thursday Night Football takes us to Miami, where the Dolphins (2-7) take on the Baltimore Ravens. The team from Baltimore is coming to Florida as a 7-point favorite. Still, something similar happened in Week 9 when the Ravens played against the unfavored Minnesota Vikings. Still, we saw them struggling a lot in that game, eventually grabbing a win in the overtime.

Will the same scenario happen on Thursday? Let’s find out!

All odds are per DraftKings as of November 8.

The Ravens enter a relatively easy period during which they will take on some of the worst teams in the NFL. Their next opponent is Miami, a team that only has two wins after nine weeks. The Dolphins’ second win of the season happened on Sunday when they beat the Houston Texans, who might be the very worst team in the league.

Baltimore, on the other hand, is 6-2 on the season, although their recent form isn’t too great. In Week 7, they got obliterated by the Cincinnati Bengals at home. The score was 41-17 for the visitors. Then, they had a bye before welcoming the Minnesota Vikings last weekend.

The Ravens were huge favorites, but the game didn’t start great for them. In fact, they were 24-10 down at one point in the third quarter. Nevertheless, they managed to get back in the game and grab themselves an overtime win.

It’s mostly thanks to their QB Lamar Jackson who had a fantastic game with 24/41 passing for 266 yards and three touchdowns. He did throw two interceptions, but he also made 21 carries, more than any other Baltimore player.

In addition to Jackson, the Ravens also need to praise their placekicker Justin Tucker, whose field goal percentage stands at 90.6% in his entire career.

Apart from doing great in the offense, the Ravens’ defense also did a decent job in Week 9, especially in the latter stages of the game. They should be able to do even better in Week 10 as they’re squaring off with one of the worst offenses in the league.

Tua Tagovailoa to Return for Miami?

This team has scored 155 points in nine games, which makes their offense the second-worst in the AFC. Unfortunately for them, their defense has also been poor, with 242 points conceded so far.

Although there’s no justification for their poor defensive form, there is an explanation why they haven’t been very productive in the offense. The thing is that their starting quarterback Tua Tagovailoa has been out with an injury for several weeks.

He fractured a bone in his finger during the game with the Buffalo Bills in Week 8. In that game, he was the only Miami player who scored a touchdown. It didn’t help them much as they lost 26-11.

Last weekend, Tua spent the entire game off the field. His replacement was Jacoby Brissett, who went 26/43 for 244 yards and one touchdown pass, as well as two interceptions. Brissett doesn’t look like someone who can harm the Ravens’ defense in Week 10. Still, the same probably goes for Tua Tagovailoa.

With or without him in the team, the Dolphins offense probably isn’t going to do much on Thursday night. However, with their starting QB making a comeback, Miami should be able to avoid a blowout win.

Pick: Baltimore Ravens to win but not cover the spread; over 47 should hit.