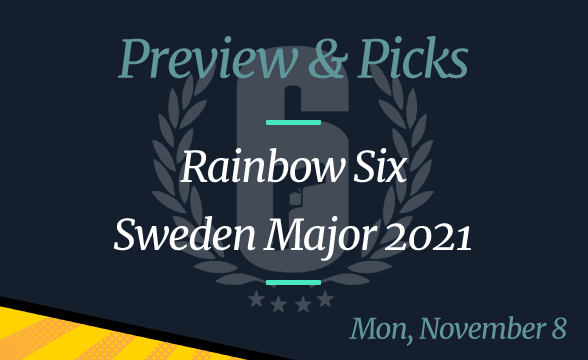 The Six Sweden Major 2021 is almost here and after the PGL Stockholm has proven a success with Counter-Strike fans, Rainbow Six top-tier teams are heading for the Nordic country to throw down with the best in the competitive scene.

Sweden has proven a nice alternative for Ubisoft which had to improvise because of the pandemic shutting down the original plans to hold six majors this year in Asia in a bid to popularize the game.

Sixteen teams are heading to Gasklockorna in Gävle and will vie for the grand prize of $500,000 from Monday, November 8 through Sunday, November 14 when the Bo5 Grand Final will take place. Here are the latest odds to check.

Where and When to Watch Rainbow Six Sweden Major 2021

The R6 Sweden Major will get underway on Monday, November 8 through Sunday, November 14. The event will be played live at Gasklockorna in Gävle, Sweden, and will be available to watch on Twitch.

BDS Esports is tipped to win the major and that is not surprising, given the team’s recent performance in the European League. Delivering consistent results, BDS Esports has quickly climbed to the very top of the R6 rankings.

They finished third-fourth in the Mexico Major in August but have upped their game and have managed to surpass both Team One and Empire in the overall bookmaking expectations. Their only bad performance was during the Six Invitational 2021 when they finished seven-eighth. Keep in mind that Team BDS also changed their coach.

Yet, if they are able to deliver on the same consistent performance as they did in the European League, BDS will have no problem climbing to the very top. They are not the only strong contenders in the race.

With a nominal difference in the odds, it’s easy to see why the first three or so teams are locked neck-and-neck. Team Empire is another contender to consider in the upcoming Major. Empire has shown little hesitance over the last several competitions they have participated in.

They managed to win the European League 2021 – Stage 2 and finished third in Stage 3. They also placed second in Six Mexico Major 2021. If we had to choose a team here, we would go with Team Empire to win the Rainbow Six Sweden Major 2021 at (+650).