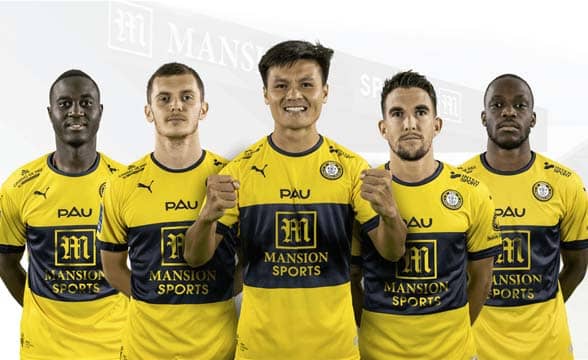 Mansion Sports and Entertainment, an online casino and sports betting operator, has named the French soccer club Pau FC as its new key partner. Mansion Sports’ will have its branding featured on the players’ jerseys and will promote the team in Asia.

As per the agreement, the soccer team will add Mansion Sports’ to its players’ jerseys and training kits. In addition, the operator’s branding will be featured at Pau FC’s stadium in Pau, France. Meanwhile, Mansion Sports will support the soccer club and will promote its games in Asia. This will boost the team’s presence in the continent, ahead of its planned 2023 club tour in Vietnam.

As a powerhouse in the Asian market, Mansion Sports is well-positioned to popularize the team and attract new fans. The operator is known as an avid supporter of sports and has existing partnerships with sports clubs all across Southeast Asia. Thanks to the agreement with the French team, Mansion Sports will be able to expand its footprint in Europe and reinforce its global position.

The Two Parties Are Thrilled to Work Together

Sunil Jamthani, general manager of Mansion Sports and Entertainment spoke about the new agreement. He shared that his team is delighted to welcome the esteemed French team to the Mansion family and lauded the club as one with a very rich history. Jamthani vowed to work alongside Pau FC and its members to deliver the best sports and sports betting companies to its partners.

Bernard Laporte-Fray, owner of Pau FC, also shared his thoughts on the agreement with the sports betting operator. He said that he is thrilled by the opportunity to further Pau FC’s international development and work with Mansion Sports. Laporte-Fray noted that the agreement will help the club expand its presence to a new region with amazing potential.

Pau FC was founded in 1959 after it split up from the Bleuets de Notre-Dame de Pau. Throughout its long history, the club has had its ups and downs. In 1995, Pau FC dropped to the Championnat National 2, the fourth tier of France’s soccer system. Luckily, Laporte-Fray was able to reinvigorate the club and in 2020, Pau FC managed to get promoted to Ligue 2.