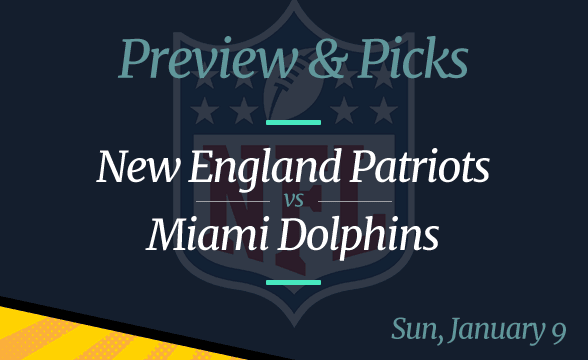 After losing to the Tennessee Titans in Week 17, the Miami Dolphins are officially out of the playoff race. It’s just the opposite when it comes to their Week 18 opponents, the New England Patriots. Whatever happens in the final week of the regular season, the Pats will make the playoffs.

The only question is whether how will the Pats get to the postseason. If they lose on Sunday, they will get there via Wild Card. However, if they win, there’s a chance they could win the AFC East. In fact, with Lady Luck on their side, they could even end up as the #1 seed in the conference.

All odds are per FanDuel as of January 5.

Patriots Defense Back on the Right Track?

Probably their strongest weapon this season has been their superb defense. These guys have conceded only 270 points, which makes the Pats’ defense the best in the entire league.

Their performances did drop a bit in the second half of December, which made their fans worried. In Week 15, they lost to the Indianapolis Colts 27-17; a week later, they lost to the Buffalo Bills 33-21, which was only the second time in the 2021 season that we saw them allowing more than 30 points in a game.

The good news is that their defensive team did a marvelous job in their first game of 2022. In Week 17, the Patriots hold the Jacksonville Jaguars to only 10 points. Another reason why they should feel good about that game is that their offense scored 50 points – their second-best performance of the season.

All Hope’s Lost for the Dolphins

The Dolphins are officially out of the playoff race after the 34-3 loss to the Titans last Sunday. Everything went wrong for Miami that weekend, as we also saw their main playoff rivals winning their games. As a result, the Dolphins have nothing to fight for in Week 18.

Still, they would surely love to finish their campaign with a win at home. At Hard Rock Stadium in Miami Gardens, they’re 5-3 on the season, with each of those wins happening in the previous five home games.

Further, they also have a decent record against the Patriots in the games played in Miami. In their previous ten duels at Hard Rock Stadium, the Dolphins won six times. Can they do it again?

Probably not, as the Pats are likely to give their 100% in Sunday’s game. A win could get them the AFC East title, under the condition that the Bills lose to the New York Jets. It seems unlikely but stranger things have happened in the NFL.

Further, the Pats could also get to the #1 position in the AFC Rankings if, in addition to the Bills, two other teams lose as well – the Tennessee Titans and the Kansas City Chiefs.

Knowing that they could gain a lot on Sunday, the Patriots will surely go for a win. They have the manpower to do it, although probably not with too large of a margin. That said, they might not be able to cover the spread.

Picks: New England Patriots to win but not cover the 6.5 spread; under should hit