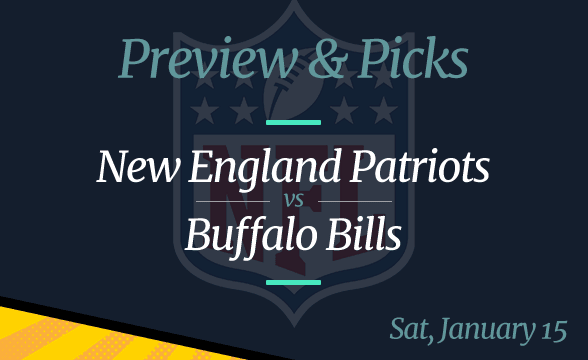 The New England Patriots will meet with their AFC East rivals, the Buffalo Bills, for the third time this season. Their previous two clashes happened in the regular season, with each team getting a win on the road. The third Patriots vs Bills duel is played in the postseason on Buffalo’s turf.

The Bills are coming to the AFC Wild Card playoffs after winning their division and finishing the regular season as the #3 seed. The Patriots came second in the AFC East division and finished as the #6 seed, which is why they now have to travel to Orchard Park to take on the Bills in the first round of the playoffs.

All odds are per FanDuel as of January 11.

Patriots Need to Be Worried

The Bills’ home venue, Highmark Stadium, is the place where the Pats have already won once this season. However, that happened during the superb mid-season drive that saw them win seven straight games. After the win in upstate New York, the Pats hit a rough patch, finishing the season with a 1-3 run. If it weren’t for the poor finish of the season, they would’ve won the division.

So, what’s the reason behind their poor performances? Their offense hasn’t been playing great. Excluding the Week 17 game in which we saw them scoring 50 against the horrible Jacksonville Jaguars, the Patriots haven’t been scoring much lately.

Their rookie quarterback Mac Jones seems to be completely out of form. The guy threw for five interceptions in his previous four games, as well as got sacked four times. What’s even worse is that in one of those four games we saw him recording the worst passer rating of his career (31.4%). The worst thing about it is that it happened in Week 16 when the Pats lost to the Bills 33-21.

They won the division already, but their ambitions are much higher than that. Their next goal is to win the AFC. The first step to achieving that goal is to beat their divisional rivals on Saturday evening. The good news for the Bills is that their key players have been superb lately, giving the impression that they can defeat literally any team in the world.

Buffalo is coming to the postseason after four straight wins in the regular season. Their offense scored 27+ points in each of those games, while their defense didn’t concede more than 21 points. Actually, the Bills have been great in all aspects of the game throughout the season.

Evidence of this is that they’re the highest-scoring team in the AFC, while their scoring defense ranks #1 in the entire league. Knowing all this, it’s only logical to think of them as the favorites in the Wild Card playoffs.

Picks: Buffalo Bills to win and cover the spread; under 43.5 to hit