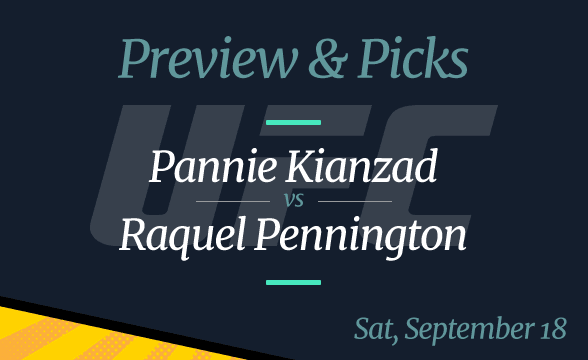 As Vegas 37 is about to happen this weekend, we dive in another pair of fighters who will be part of the preliminary card and fight in the women’s bantamweight division. The Pannie Kianzad vs Raquel Pennington fight is one of the most-anticipated bouts on the card as it would provide an alternative viewing experience to the all-male night.

Kianzad is listed as the underdog at (+108) going up against Pennington at (-128). The underdog has a much better overall MMA performance with her 16-5-0 and she will face an equally experienced but less successful Pennington. The event is taking place at UFC Apex in Las Vegas on Saturday, September 18.

Pennington Isn’t a Sure Winner in This Fight

The odds are fairly close for the upcoming bout between the fighters and that is understandable. While Pennington is posted at (-128), Kianzad’s career in the UFC is something to take into consideration.

For starters, Kianzad lost her debut in the UFC against Macy Chiasson. She similarly lost to Julia Avilla the next year, but since November 2019, Kianzad has been on a winning streak. She won four fights in a row and is now looking for a fifth one.

Her overall career puts her stats at 16-5-0 which is pretty decent. She has won against Alexis Davis in her most recent bout and most of her fights have gone the distance, meaning she can muster up the endurance to last in a fight.

This brings us to Kianzad who is tipped as a favorite but has a much-patchier record. Why is she then posted as the favorite on the moneyline? Well, one explanation has to do with the fact that she has more showings in the UFC. She has been able to go the distance in many of the fights she participated in and she won against Marion Reneau.

While she sports just 11-9-0, she has only fought in the UFC, meaning that she is completely accustomed to the league’s standards and what to expect. A fighter like her has grit and the track record to throw an upset.

However, if you are looking to squeeze a slightly better value here, we may recommend sticking with Kianzad on the moneyline. She does have the better stats and she took on fairly even opponents in the UFC as Pennington.

If you are interested in the spread, this fight is going to go over two rounds as both fighters know how to last in the octagon.