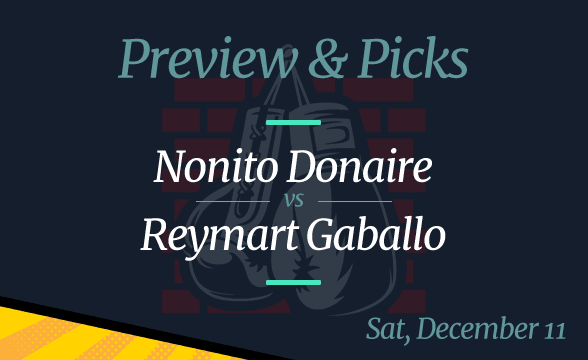 This Saturday at Dignity Health Sports Park in Carson, California, two Filipino boxers will lock horns in a battle for the WBC bantamweight title. The defending champion Nonito Donaire is challenged by Reymart Gaballo, the holder of the WBC interim bantamweight title.

Oddsmakers think Donaire will have no problems beating his way less experienced rival. Still, Gaballo mustn’t be underestimated; after all, he’s still 100% in his professional career.

All odds are per FanDuel as of December 9.

Donaire’s Experience Could be the Key Factor

Donaire got ahold of the WBC bantamweight title in May 2021 after knocking out the previously undefeated pugilist Nordine Oubaali. By doing that, he became the oldest boxer in history to hold a bantamweight championship belt at the age of 38.

Donaire has turned 39 a month ago, but he shows no signs of slowing down. The Filipino Flash seems to be in top shape physically, while his hitting and deflecting skills are still elite.

Further, after fighting 47 professional bouts and recording a 41-7 record, Donaire has the needed experience to defeat almost any bantamweight fighter in the world.

Does this include his next opponent, Reymart Gaballo? Oddsmakers surely think so. They’ve given the role of a huge betting favorite to the Donaire.

Can Gaballo Upset the Odds?

Gaballo is 14 years Donaire’s junior, which suggests he should be faster and more agile than his opponent. That might be true, but he doesn’t have too much experience fighting such difficult rivals.

The thing is that even though Gaballo is undefeated in his 20 professional bouts, most of his opponents were nowhere near as good as Donaire.

His toughest challenge was the fight for the vacant WBC interim bantamweight title in December 2020. His opponent was Emmanuel Rodriguez, who was 19-1 ahead of that fight.

Gaballo won by split decision, which many boxing fans and pundits saw as super-controversial. Actually, many still believe it’s Rodriguez who should’ve won. The Filipino boxer now has a chance to silence his critics by getting a win over a major favorite.

To do that, he’ll have to fight smart and try to tire his foe. The fight is supposed to last for 12 rounds max and if Gaballo pulls through to the final bell, he could get another win by decision. Still, the chances of him not getting knockout out before seem very slim. Donaire is a -375 favorite for a reason.