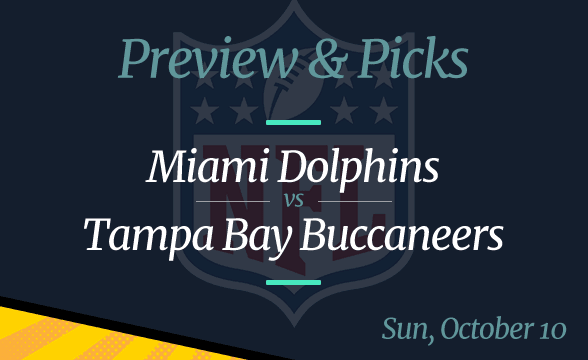 Two rivals from Florida meet on Sunday evening at Raymond James Stadium, where the Tampa Bay Buccaneers welcome the Miami Dolphins. Tampa is 3-1 ahead of the NFL Week 5, with the Bucs only loss happening in Los Angeles two weeks ago when the Rams beat them 34-24.

The Buccaneers rebounded the following week in Tom Brady’s return to Foxborough, where they were better than the New England Patriots, winning the game 19-17.

Oddsmakers expect the Bucs to add another win to their tally the coming weekend when they face the Dolphins, who are without a win since Week 1. If they beat the Dolphins, it’s going to be the fifth straight win for the Buccaneers in the interstate contests.

All odds are per DraftKings as October 6.

Legendary quarterback Tom Brady started the new season in top gear, helping his team demolish several tough teams. He was decent even in the loss to the Rams. However, he didn’t do too well in the last week’s game.

On Sunday evening, the Buccaneers met with Brady’s former team, the New England Patriots. Bill Belichick’s boys came up with a good tactic to keep Brady at bay, preventing the quarterback from making even a single touchdown pass.

He went 22-of-43, which is far below his usual standard. Brady did, however, pass for 269 yards in that game, helping the Bucs’ placekicker score five field goals.

This time, Brady and the Bucs are facing a defense that just isn’t good as the Pats’ defense. Proof of this is that the Dolphins have conceded 109 points already. That accounts for roughly 27 points conceded per game on average.

Still, the Dolphins’ main problem in 2021 isn’t their defense. Instead, their Achilles’ heel this season has been their anemic offense.

Is There Any Hope for Miami’s Offense?

Sure, there is, but only once Tua Tagovailoa recovers. The Dolphins’ sophomore quarterback was injured in Week 2 and will probably miss a couple of more weeks. In fact, according to recent reports, he’ll probably make his comeback in Week 6.

This means problems for the Dolphins offense, which hasn’t been scoring much. Without their starting QB, they will probably find it very hard to score against one of the league’s toughest defenses.

Furthermore, they have a very bad record against the Bucs, having lost each of their previous four meetings. Are they in for another loss? It definitely seems like it.

Actually, the only question mark hovering about this game is whether the Bucs will be able to cover the 10-point spread. It’s not going to be easy, but with Brady playing the way he’s gotten us used to, the Bucs should be able to grab a big win.

Pick: Tampa Bay Buccaneers to win and cover the spread; over 48 should hit, as well.