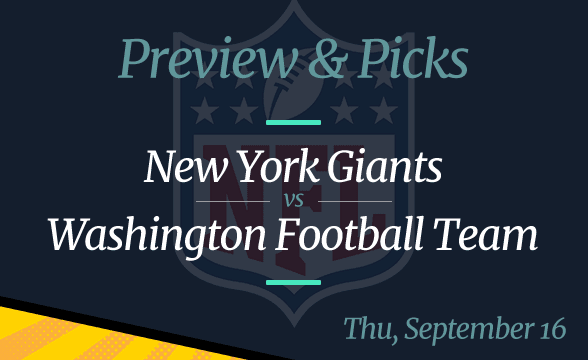 Ron Rivera’s boys lost to the Chargers in Week 1, but that wasn’t the worst thing to happen in that game. What really should worry the Washington Football Team (WFT) is that their starting QB, Ryan Fitzpatrick, picked up a serious injury.

As a result, backup Taylor Heinicke will probably step in as his replacement in the game against the New York Giants on Thursday evening.

All odds are per MyBookie as of September 13.

Taylor Heinicke the Most Likely QB Choice for WFT

When Fitzpatrick suffered a hip injury against the Chargers, Heinicke came onto the field as his replacement. It’s very likely that the backup QB will be given the starting role in the game against the Giants on Thursday.

Obviously, Heinicke isn’t the best option, which is why we’ll probably see the WFT go shopping soon. In fact, there are some rumors that Cam Newton might be heading to Washington. Still, even if he does, he definitely isn’t going to be ready by Thursday.

With Heinicke as the starting quarterback, Washington’s chances don’t look as good as they did before. In fact, we’ve already seen the odds moving against them. Still, at the moment of writing, the WFT remains the favorite. The reason is that they’re taking on one of the worst NFL teams in Week 2.

Can the Giants Grab Such a Good Opportunity?

The Giants went 6-10 last season, which is far from a good record. Still, some of their players did really well that season. In fact, two of the Giants earned a Pro Bowl invite that season – tight end Evan Engram and cornerback James Bradbury.

Their quarterback Daniel Jones didn’t do that well, but we did see him improve from his rookie season. Now in his third year as a New York Giants player, Jones is expected to take a giant leap forward.

Jones did okay in Week 1 against the Broncos, going 22-for-37 for 267 yards and one touchdown pass. He also scored a rushing touchdown on his own in that game. The reason why we didn’t see him do even better is that he was playing against one of the league’s better defenses.

The bad news is that the WFT defense is at least equally good as Denver’s. That said, we probably aren’t going to see him and his offensive teammates scoring too much. Still, if their defense does well, the Giants have every right to hope for a win.

Pick: New York Giants to win and the total will stay under 42.5 points.

Catena Media Board to Execute on Share Buyback Mandate