Illinois-based terminal operator and slot machine provider Accel Entertainment is up for a two-year license in Nevada, according to a recent recommendation from the Nevada Gaming Control Board. The license will allow Accel to offer its slot machines and amusement devices to restaurants, bars, truck stops, and gaming cafes in the state.

The License Depends on a Pending $140 Million Acquisition

The company would only receive its Nevada license provided it would seal an important acquisition deal for Century Gaming Technologies. The deal is valued at $140 million and it is expected to be sealed by the end of May. The licensing proposal will be sent before members of the Nevada Gaming Commission a few days earlier, on May 19.

By acquiring its rival slot operator, Accel would ensure the necessary foundation for Montana and Nevada. These are two of the most important gaming markets for gaming terminals in the country. Accel projects a total of 23,000 up to 25,000 slot machine and video game terminals by the end of the year, compared to around 13,600 in 2021.

The new resulting company is expected to finish the year with anywhere between 3,700 to 3,800 locations, compared to 2,584 locations in the previous year. The acquisition would also propel Accel to new states with both existing and potential markets waiting for gaming to become legal. In June 2021, Accel Entertainment’s video gaming terminals (VGT) generated $60.3 million in gross revenue in Illinois.

Not everything went smoothly during the board’s hearing that decided to recommend the two-year license for Nevada. An important matter of discussion was a fine set at $5 million that was levied against the company by the Illinois Gaming Control Board. The fine was triggered by an agreement that the company had signed with DraftKings. According to regulators, the agreement went against regulations that strictly forbid incentives for keeping Accel’s VGTs in video gaming venues.

Board member Brittnie Watkins also raised the issue of Accel executives in relation to the way they handled a case of sexual harassment case, cultural compliance problems, due diligence or document retention matters.

In response, Accel’s private counsel Gregory Gemignani said that the company has an active compliance plan it will continue to improve, while fully obeying Nevada’s strict regulations. He added that Century’s personnel will be retained and that their compliance culture will be properly integrated into Accel’s operations.

In March, Nevada came close to beating its former gross gaming revenue record from casino operations in July 2021 with a massive $1.355 billion. Slot machines and other gaming terminals generated $903 million.

Previous Article
Casino May 5, 2022
German Sportsbooks Partner against Hesse in One Massive Lawsuit 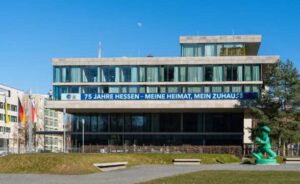