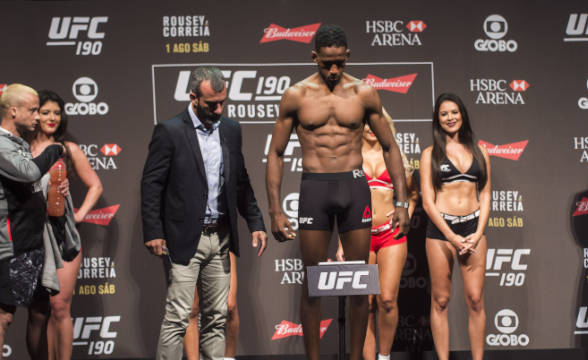 UFC on ESPN 38 brings us six interesting fights on its main card, with the welterweight clash between Neil Magny and Shavkat Rakhmonov being one of the most interesting ones. Truth be told, this opinion isn’t shared by bookmakers, who think Rakhmonov (15-0) will have no problems staying undefeated. We, however, don’t think Magny (26-8) should be underestimated.

All odds are per FanDuel as of June 22.

Can Magny Upset the Odds on Saturday?

Neil Magny’s main advantage in Saturday’s duel is his experience. The fight at UFC on ESPN 38 is going to be the 35th fight in his professional career, which started back in 2010. After fighting several bouts in lower-ranked promotions, Magny signed a UFC contract in early 2013.

Since joining the world’s best MMA promotion, he’s won 19 fights while losing seven. Three of his wins won him the Performance of the Night bonus, although the last time it happened was back in 2016.

More recently, we saw him fight two fights in 2021, losing to Michael Chiesa by unanimous decision and winning against Geoff Neal by the same method. In 2022, he’s fought once, beating Max Griffin by split decision.

Why is Rakhmonov Such a Strong Favorite?

Shavkat Rakhmonov is still without a single loss in his professional career. However, he’s fought 19 fights fewer than his next opponent. Further, the Kazakh fighter has been in the UFC for less than two years, fighting only three fights in this promotion.

So far, he’s defeated Alex Oliveira and Michael Prazeres by submission, and Carlston Harris by knockout out, for which he earned the Performance of the Night bonus. However, none of those guys is ranked as high as his next opponent. As a reminder, Magny is currently sitting in the #10 position in the UFC welterweight rankings, while Rakhmonov is five spots lower.

Magny might seem a longshot bet, but we believe he can upset the odds. He’s got the experience necessary to pull off such a thing.

Our prediction is that Magny is going to fight smart, doing all he can to take the fight to a distance. Meanwhile, his opponent will want to get the job done quickly. After all, that’s his fighting style – none of Rakhmonov’s 15 pro fights went the distance.

We think that will change this Saturday. Magny can take the fight to the final bell, after which the judges might vote in his favor.

Picks: Neil Magny to win; fight to go the distance