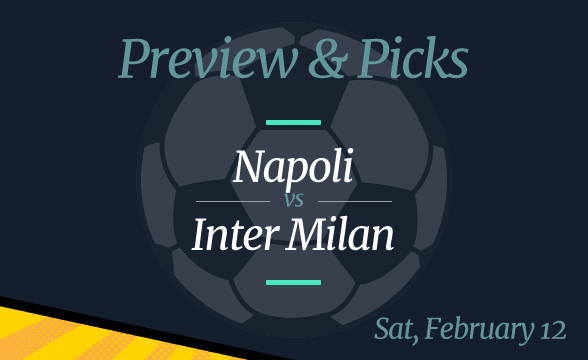 Napoli has a chance to get to the top of the Italian Serie A table this weekend. For that to happen, they need to beat Inter Milan, the team that’s currently occupying the top spot. Another club that’s in the competition for the #1 place is AC Milan.

Knowing all this, it’s clear that both Napoli and Inter Milan will give their very best on Saturday. History teaches us that in cases like this, the winner is usually the team with a better roster. So, who has better players – Napoli or Inter, if any?

All odds are per FanDuel as of February 9.

Kalidou Koulibaly is Back for Napoli After AFCON

Napoli is without a single loss in Serie A in 2022, with four straight wins in the Italian top-flight. The most impressive fact about this team’s run is that one of their best players was out during that period.

The man in question is Napoli’s center-back Kalidou Koulibaly, who’s just returned from the Africa Cup of Nations, where he won gold with Senegal.

Valued at over $50 million, Koulibaly is Napoli’s most expensive defender. This team’s most valuable player is Victor Oshimen, a forward who’s scored six Serie A goals this season. That’s just one fewer than Napoli’s scoring leader in the Italian league, Lorenzo Insigne.

With these guys in the team, it’s no surprise that Napoli is flying so high. The team is sitting in the #2 position, with just one point fewer than Inter Milan. On top of that, Napoli has also played one game fewer than the table leader.

What this means is that even if Napoli doesn’t win on Saturday, the Sky Blues will get another chance to get to the top next week. However, if Inter Milan wins, things could get much more complicated for them.

Last weekend, Inter Milan lost Derby Della Madonnina to its city rival, AC Milan. Losing to their archrivals hasn’t done well for the confidence of Nerazzurri, not to mention that the defeat has made their position in the Serie A standings less secure.

That’s why winning on Saturday is of utmost importance for Inter. Another reason is that Inter also needs to think of the Champions League. After the clash with Napoli, this team welcomes Liverpool in the Round of 16 of the continental championship.

Taking on Liverpool after back-to-back losses would not be great for Inter, which is why you can be sure they’re going to go far and beyond to avoid losing in Naples.

Nerazzurri surely have the player quality to avoid a defeat to Napoli. The question is whether they have what it takes to win? Well, the fact is that they won only one Serie A game played on Napoli’s turf in their previous 15 meetings.