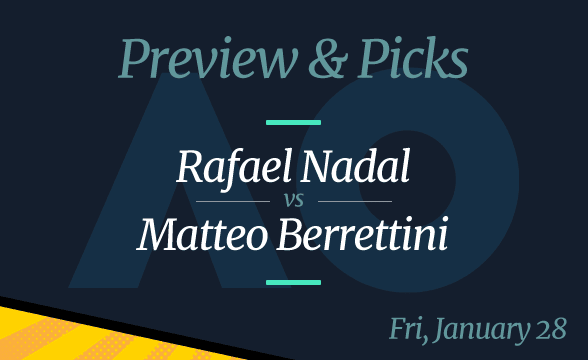 Rafael Nadal continues his quest for his 21st Grand Slam title. If he wins the 2022 Australian Open, he’ll turn the tennis GOAT debate in his favor. However, winning the trophy is easier said than done, especially knowing that to get a title shot, he first needs to defeat Matteo Berrettini in the semifinal.

Online sportsbooks think Nadal will pull it off. Still, knowing that Berrettini has all wins in the previous 21 Grand Slam matches, excluding those with Novak Djokovic, Rafa will probably have to work really hard on Friday.

All odds are per FanDuel as of January 26.

Rafa Has a Chance to Break an Important Record

Nadal is just two wins away from becoming the player with the most Grand Slam titles in the history of tennis. Right now, he and his two biggest rivals – Novak Djokovic and Roger Federer – each have 20 titles in the cupboard.

However, Nadal’s two foes aren’t taking part in the 2022 Australian Open. Without them in the picture, his chance of winning his first major tournament since 2019 looks pretty decent.

He surely has the motivation to win on Friday, as well as the necessary set of skills to defeat Berrettini. What Nadal might not have is enough energy to withstand another marathon match.

The thing is that the Spanish legend has missed a big chunk of the last year’s campaign due to a recurring left foot injury. The absence has certainly taken a toll on his fitness levels.

Proof of this is that we saw him making big pauses in the quarterfinal match with Denis Shapovalov, which annoyed his Canadian opponent. Speaking of the quarterfinal, the match lasted over four hours, draining Nadal of energy.

By beating Gael Monfils in the quarterfinal, Berrettini became the first Italian player ever to qualify for the final four of the Australian Open. This didn’t come as a surprise to those who’ve been following tennis over the last couple of years. Those people witnessed his impressive rise.

At the age of 25, Berrettini is sitting in 7th place in the ATP Rankings, two spots below Nadal. It’s very likely we’ll see him climb even more if he continues playing at the same level. This goes especially for his performances at majors, where he’s won his previous 21 matches against opponents who aren’t Djokovic.

It’s an impressive stat, but the fact is that none of those players were among the ATP Top 10 at the time when they played against Berrettini. Actually, when playing against players from near the top of the rankings, the Italian star usually doesn’t do great.

Berrettini has a 30.4% win percentage against opponents from the ATP Top 10, with a 7-16 record. That said, in January 2022, he probably doesn’t have what it takes to beat Nadal. Still, he surely has the skills to give the Spaniard a run for his money.