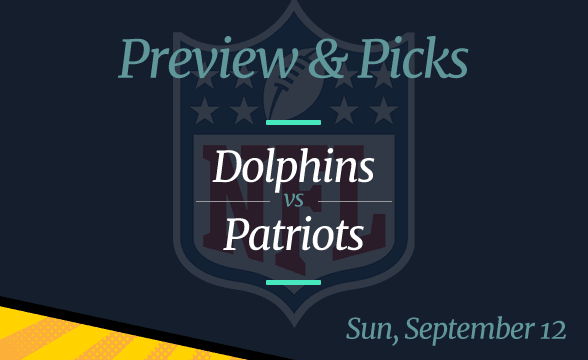 The Miami Dolphins will play the New England Patriots this Sunday, the first week of the 2021 NFL season. Cumulatively, the teams have played against each other more than 100 times, so, undoubtedly, an interesting game is ahead for NFL fans and sports bettors.

During the first week of the 2021 NFL season, the Miami Dolphins will go up against the New England Patriots. Previously, the duo has played against each other 111 times. From that total, 57 games were won by the Dolphins, while the Patriots have won 54. The game will take place at Gillette Stadium, home of the Pats, this Sunday, September 12.

Dolphins vs Patriots When and Where

Odds to Win Dolphins vs Patriots

Based in the Miami metropolitan area, the Dolphins were founded in 1965. Owned by Stephen M. Ross, the team is currently the oldest professional sports team in Florida. The Dolphins have won the Super Bowl a total of five times and have also won five AFC Championships. The team’s head coach is currently Brian Flores.

The 2020 NFL season was Miami’s 51st season within the NFL. The team finished their last season with ten wins. That surpassed Miami’s 2019 result, when they only won five contests. Overall, the team has so far secured 23 double-digit wins. Last season, the team finished with a 10-6 record and did not make it to the playoffs. During the 2020 season, the team had 41 sacks and scored a total of 404 points. Considering the Dolphins’ elimination from last season’s playoffs, a win during the first week of the 2021 season will undoubtedly boost their confidence going forward.

An Exciting Contest Is Ahead

Based in the Greater Boston, MA, area, the Patriots was founded back in 1959. The team has appeared in the Super Bowl11 times and won six of those games. In fact, the Patriots hold first place for most Super Bowl wins together with the Pittsburgh Steelers. New England missed the playoffs last year after having a slow season.

During the 2020 season, kicker Nick Folk connected on 26 out of 28 field goals. Patriots players that also contributed significantly last season were Anfernee Jennings, Adrian Phillips and Chase Winovich, as well as Adam Butler. Butler was just picked up by the Pats after becoming a free agent, ending his stint with the Dolphins.

Considering that the Dolphins have faced the Patriots more than 100 times, we can honestly say that an exciting game is ahead. Regardless of who wins, the duo will undoubtedly bring plenty of action for all sports fans.