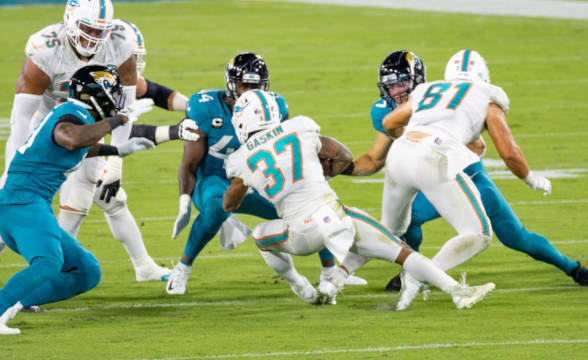 The Miami Dolphins are the only AFC team with a 100% win rate in the 2022 NFL. The team that won the AFC last season – the Cincinnati Bengals – are 1-2 this year, with their first win of the season happening last weekend when they outclassed the New York Jets 27-12.

Beating the Jets isn’t a big achievement, but the Bengals did show they can play great offensive football. But is it great enough for a win against the Dolphins? If you would like to learn what we think, make sure to read our Dolphins vs Bengals preview until the end.

The Dolphins Looking for Their Fourth Win in 2022

Miami is 3-0 so far, which is a great achievement, especially considering that they played against some really tough opponents in the first three weeks of the NFL action. In Week 1, they destroyed the New England Patriots 20-7. The following week, they beat the Baltimore Ravens 42-38, while last weekend we saw them beat the Buffalo Bills 21-19.

Offensively, they’ve been brilliant in 2022. The partnership between QB Tua Tagovailoa and WR Tyreek Hill seems to be working out great, while their running game has also been impressive. Actually, in their most recent game, running back Chase Edmonds scored two rushing touchdowns against the Bills.

Although all eyes are on the Dolphins’ offense, their defense has been equally great. In fact, they managed to keep the Bills to just 19 points, which was the first time that Buffalo’s offense failed to score over 20 points since December 2021.

Joe Burrow is Back at His Best?

The Bengals offensive line is to blame for their first two losses of the season. They just weren’t providing QB Joe Burrow with enough protection against the Pittsburgh Steelers and Dallas Cowboys.

In Week 3, however, they did a fine job, the result of which was that the Bengals beat the Jets 27-12. Burrow went 23/36 passing for 275 yards and three touchdowns and no interceptions. Their defense also did a fine job, keeping the Jets to just 12 points, all of which came from field goals.

Online sportsbooks think the Bengals are going to win this game, but we don’t think they should be seen as favorites. Sure, they do have a lot of offensive potential, but the Dolphins are good defense-wise. Knowing that the Bengals offensive line has been struggling, we think the Dolphins’ defense is going to cause huge problems for Burrow.

Also, we also think Miami’s offense is going to continue to play great football, with the Tagovailoa-Hill duel recording at least a couple of touchdowns on Sunday.