MGM Resorts International has set a planned date for the foundation work of its casino resort in Osaka, Japan. According to the chief executive and president of the company, Bill Hornbuckle, if Japanese authorities give MGM the green light, work is set to commence at the end of 2023.

The Resort Will Likely Open at the End of the Decade

While speaking about the project, Hornbuckle stated that MGM hopes to receive the decision from the Japanese government this October. The Osaka resort complex is worth $8.3 billion and the company’s target opening date is by the start of 2030.

Hornbuckle stated that in terms of opening, the project is slated to welcome patrons either late in 2028 or 2029. He also stated that MGM is among the “long-term survivors” in terms of being eligible to gain a license in Japan.

If the resort is approved, Hornbuckle hopes to “be doing pylons by late 2023, early 2024.” As for the chance to work in Japan, he noted that the thought of having a crack at the market is very compelling.

Data released by the city of Osaka and the prefecture states that the IR is slated to attract around 20 million visitors each year. The annual sales are likely to reach $4 billion and the annual economic ripple effects are set to reach $8.8 billion.

MGM Also Made a Bid to Purchase LeoVegas

MGM Resorts International is competing on more than just one front. Apart from being keen to gain an extra chunk of the market in Japan, the casino giant is looking to increase its European influence. Recently, it announced that it made an official bid to purchase LeoVegas for $607 million.

LeoVegas is one of the most reputable online casinos in Europe as it is licensed in 8 jurisdictions. Not only does it provide licensed players with casino services, but LeoVegas is also a well-known sportsbook and its offering could be integrated with BetMGM’s business.

Per MGM, if the offer becomes unconditional no later than August 2022, the casino operator will likely close the transaction by the end of the year. The acceptance period of the offer will commence in June and will end in August. All of LeoVegas’ shareholders have been advised to accept the offer, which currently sits at $6.20 per share.

Apart from being a reputable casino brand, LeoVegas is also highly profitable as its revenue in the year ending on March 31, 2022, reached $414.24 million. 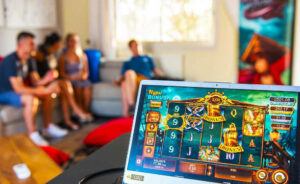 Casino May 3, 2022
KSA Calls out Stakeholders on AML and CTF Shortcomings