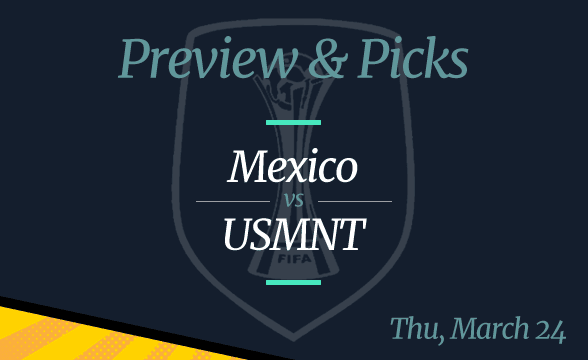 There are only three more rounds left in the FIFA World Cup Qualification in the CONCACAF region. As per the rules of the competition, the top three teams get the ticket to Qatar directly, while the #4 team has to play the intercontinental playoffs.

Right now, both Mexico and the USMNT are in the top 3, each with 21 points. The trouble is that Panama is lurking behind with just four points fewer, followed by Costa Rica with a total of 16 points.

What all this means is that the job isn’t over, not for Mexico nor for Team US. However, if one of them wins on Thursday at Estadio Azteca in the Mexican capital, that team would secure a spot in the 2022 World Cup.

Knowing this, we can assume that the Mexico vs USA clash is going to be a feisty one. Actually, most of their previous meetings were and this one shouldn’t be an exception.

The Mexico national soccer team is without a loss at Estadio Azteca in competitive games since September 2013. That accounts for nearly 100 home matches without a single defeat. Another impressive fact is that Mexico is without a home loss to the United States since 2002.

This should come as much of a surprise considering that Mexico always gets fantastic support from their fans when playing home. Estadio Azteca is the world’s eighth-largest soccer stadium in terms of capacity with a total of 87,523 seats. You can be sure that most of those will be taken in Thursday’s game.

Mexico players will have their fans to cheer them on, but do these guys have the quality to outplay Team US. It sure seems so. After all, all of Mexico’s biggest stars have come to Mexico City, including Raul Jimenez, Hirving Lozano, Guillermo Ochoa, and others.

Injury Problems Pilling on for the USMNT

One of the key reasons why the USMNT odds make this team the underdog against Mexico is that Americans will miss several important players. Weston McKennie, who was one of the key men in Team US early on in the qualifications, is out for the season.

Matt Turner, the first-choice goalkeeper of the USMNT will also miss the Mexico game, the same as Segino Dest and Brenden Aaronson.

Gio Reyna will also probably sit out Thursday’s game, considering that he still hasn’t recovered from an injury he suffered while playing for Dortmund in the Europe League a week ago.

Mexico vs US Prediction

Mexico should win this one. Not only is this team better quality-wise (especially now that the USMNT is struggling with injuries), but the Mexicans play on their turf. They also have the motivation to win as it would, most likely, mean booking the ticket to the 2022 World Cup.

Picks: Mexico to win; under 2.5 goals