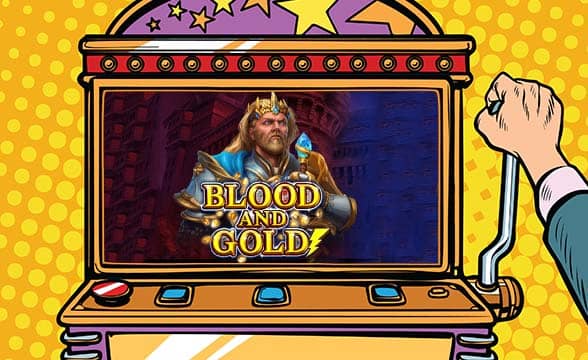 Players Can Join the Red or the Blue Army

During a Blood and Gold game, players must collect various symbols to win. The game has three rows and five reels. In Blood and Gold, there are a total of 25 paylines, allowing for a higher degree of flexibility.

The highest-paying symbols represent the king of the Blue faction and the Queen of the red faction but players may also collect letters, trebuchets and war horns. In addition, there are wild symbols that help players score a win. However, wild symbols cannot substitute the scatter shield symbols which trigger the Battle rounds, the game’s version of a bonus game. To trigger this event, players must first collect six or more scatter shield symbols.

During the Battle rounds, players can pick an army to lead. This choice will be important, so they must choose carefully. Once the Battle rounds begin, a battle will take place after each spin. Depending on the results of the spin and the symbols players get, they may either win or lose the battle. Should a player lose, their earnings for the spin will be invalidated. After three losses, the Battle rounds end and the player’s army must withdraw.

However, lucky players may land on an extra life symbol that awards them with one additional try. These symbols appear only in the middle reel and will appear only if players have 4 lives or fewer.

Blood and Gold will first launch on Rank Group’s platform in Europe but will later launch with other operators as well. The title is available on Light & Wonder’s OpenGaming platform, allowing operators to easily integrate the game into their offerings.

Speaking about the new game, Maokhamphiou noted that Blood and Gold’s battle mechanic is something he expects players to like. The decision element when picking an army, as well as the bonus lives and victory opportunities, are all things that will surely appeal to Lightning Box’s fans.

Light & Wonder’s vice president of game development, Rob Procter, praised the in-house studio’s talented team for creating such an engaging and entertaining title. He said that the army picker is a true innovation and is excited to see the players’ reception.

Must Read
By Jerome García
Slots