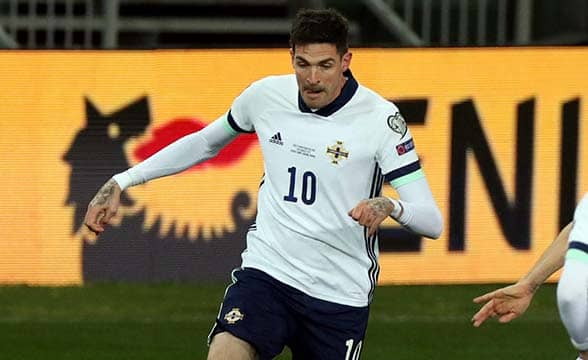 Kyle Lafferty, a professional Northern Irish soccer player, has had a long and successful career. However, he has also had some serious gambling addiction problems in the past. Lafferty decided to talk about his past woes and appealed for a ban on gambling in pro soccer.

The Player Used to Struggle with a Gambling Addiction

Lafferty is 34 now and has enjoyed notable successes in Scottish soccer. He is one of the powerhouses in the local leagues and has three consecutive Scottish top flight titles behind his back.

However, not everything has been smooth for the soccer pro. On the contrary, he is what some would call a controversial player or a problem gambler. His addiction to gaming earned him a $26,700 fine in 2016. On the bright side, this fine helped the player open up and talk about his struggles.

Lafferty joined the Pint and Two Shots podcast where he spoke about his gambling endeavors. He admitted to being a problem gambler who would play a lot. Sometimes, he would even play right after visiting Gambling Anonymous meetings.

The Soccer Pro Got the Help He Needed

Reminiscing about his ban, Lafferty shared that it made him realize the mess he had gotten himself into. In his meeting with the Football Association, he said that he acknowledges his fault and is not blaming anyone. His honesty helped him as the Association understood his pain and advised him to seek help from Sporting Chance’s Tony Adams.

Lafferty went from Norwich to London each time he got the chance. He noted that the meetings with Adams helped him a lot and he eventually got his gambling habits under control. In addition, he said that the Gamblers Anonymous meetings also played a huge role in the overcoming of his addiction as they allowed him to meet other people who struggle with the same problems and open up.

Lafferty’s past struggles inspired him to push for a ban on the presence of gambling companies in pro soccer.

When I first came out it was a massive weight off my shoulders. I’d love to come up with something that stops betting companies having any say in football. For anyone, but especially footballers because they are in the limelight, there’s always help. The backing and support you get will be mind-blowing for yourself.

Lafferty urged any players who struggle with gambling to come and see him. He said that he would gladly speak with both past allies and competitors and will do anything in his power to help them overcome their addiction.