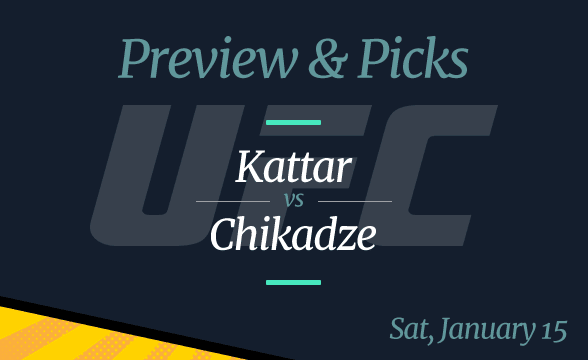 The headliner fight of the UFC Vegas 46 event is the featherweight bout between Calvin Kattar (22-5) and Giga Chikadze (14-2). The fight is likely to be a true barn-burner considering that both fighters are in the top 10 in their weight division.

Kattar is sitting in the #5 place ahead of the UFC Vegas 46, while Chikadze is three spots lower. The winner of the bout could climb a few spots higher, as well as move a few steps closer in the contender queue.

All odds are per FanDuel as of January 14.

Kattar Looking to Bounce Back After the Max Holloway Loss

Kattar’s most recent trip to the octagon was on January 16, 2021, when he locked horns with Max Holloway. After five rounds, the judges scored Holloway the winner.

It was the second time in a row that Kattar’s bout went the distance. The same happened in the fight against Dan Ige, which Kattar won by decision.

In fact, most of his UFC fights were decided this way. Since he joined the elite MMA promotion in summer 2017, we saw Kattar fighting nine fights, five of which lasted until the final bell.

Chikadze Has High Ambitions for His UFC Career

He might not be ranked as high as Kattar, but Giga Chikadze could become the next big thing in the UFC featherweight division. The Georgian martial artist is on a 9-fight winning run which saw him defeating such MMA greats as Edson Barboza.

For his TKO win over Barboza, Chikadze got himself a Performance of the Night bonus from the UFC. It was the third consecutive time he won this accolade. Previously, it happened against Cub Swanson and Jamey Simmons, both of whom he beat by TKO in Round 1.

Although he loves finishing off his opponents early on, Chikadze isn’t a short-tempered fighter. Instead, keeping his focus is one of his main traits as an MMA athlete. Evidence of this is that we saw him winning his other four UFC fights by decision.

He will need to fight wisely if he wishes to beat Kattar on Saturday evening. In turn, it would probably mean getting a win by points.