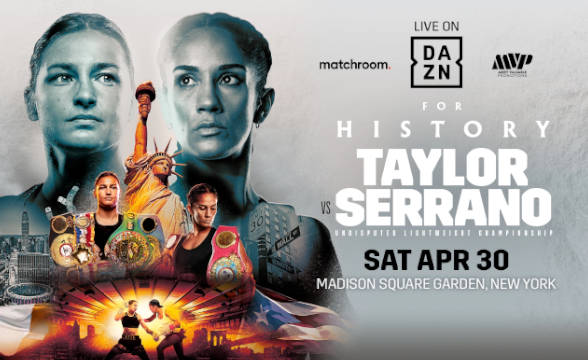 Katie Taylor and Amanda Serrano go toe to toe in a battle for lightweight glory. There’s so much at stake in Saturday’s bout, which could end up becoming the fight of the decade.

There are several reasons why we decided to do a Katie Taylor vs Amanda Serrano prediction, the main being that the two fight for five championship belts. Taylor is putting all of her titles on the table, namely the WBC, WBA, IBF, and The Ring lightweight title.

Another reason why this might turn out to be one of the best bouts in years is that the title challenger is legendary Amanda Serrano. According to BoxRec and The Ring, the Porto Rican pugilist is the #1 best female boxer on the planet.

That’s what boxing experts think, but what do oddsmakers believe is going to happen at Maddison Square Garden? Judging by the Taylor vs Serrano odds, they think this is going to be a very exciting fight.

All odds are per FanDuel as of April 13.

Taylor’s Toughest Challenge of Her Career

The Irish boxer still has no losses in her professional career, with a record of 20-0. Her career started in November 2016, and just nine months later, Taylor won her first-ever title – the WBA Inter-Continental Lightweight title.

From there, she went on to win another six titles, as well as defend her championship belts against 12 different pugilists.

She did all this by boxing smart. In fact, Taylor is famous for boxing rather carefully, not rushing anything. This explains why 14 of her 20 bouts went the distance. Further, each of her seven fights saw her win by decision. The last time she defeated an opponent by a knockout/technical knockout was in June 2019.

Serrano Seen as a (Slight) Favorite

She’s 42-1 in her professional boxing career. However, boxing isn’t the only thing she’s been involved with. Serrano has also been dabbling in professional wrestling and MMA. Still, boxing remains her #1 specialty.

The proof of this is that she’s one of a few boxers who have won world championships in several different classes. She’s won nine world titles across seven divisions – more than any other female boxer has ever done.

Anything can happen in this fight, but one thing seems certain – we’re going to see a real battle in the ring until the very end.

With both boxers determined to do their best, the bout will probably go the distance. But who will win the judges’ vote? Katie Taylor seems more likely to do it. After all, she’s the kind of boxer who loves fighting these sorts of bouts.