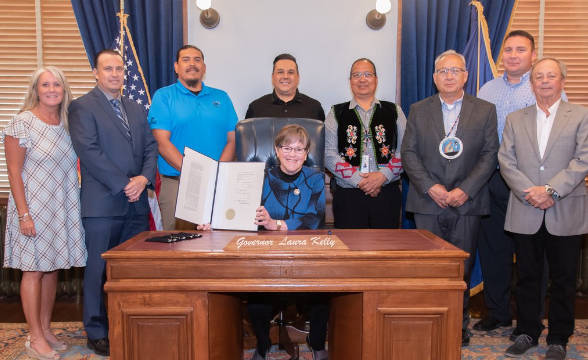 SB 84 was officially passed into law on May 12 and is going to provide new income taxes and offer more opportunities for Kansas to develop new infrastructure and fund education.

Sports Betting Bill Will Be Extensive

Kansas Gov. Laura Kelly ceremoniously signed Senate Bill 84 on Monday. The new bill will make sports betting legal in the Sunflower State as of July 1, with regulators facing a January 1, 2023 deadline to prepare regulatory requirements and launch operations. Governor Kelly was even more optimistic about it, sharing a timeline that could see operations start as early as this autumn, in time for football season.

The new bill will enable sports betting through the four state-owned casinos in KA, which can establish their very own sportsbooks or engage with a maximum of three online gambling operators for mobile platforms business. These activities are expected to be under the control of the Kansas Lottery, joined side-by-side by the Kansas Racing and Gaming Commission.

Alongside the four state-owned casinos, establishments such as nonprofit veterans or fraternal organizations, as well as restaurants, will be allowed to hold sports betting. American Indian tribes are also expected to completely preserve their tribal sovereignty, meaning negotiating changes in tribal gaming compacts that will make them compliant with the new bill. Governor Kelly said that “We need to modify their compacts, so that process is proceeding now,” confirming the multi-step process has already been initiated.

Internally, the National Indian Gaming Commission sees sports wagers as Class III gaming, meaning it falls under the tribal-state compact rules. The secretary of the interior then reviews and approves the compacts. After submitting a request for negotiation, it goes to the Governor, followed by the state’s Lottery director, who then enters into an agreement on the state’s behalf. Successful completion of this entire process would mean tribal casinos can be included in the list of establishments that will be compliant with the upcoming regulatory framework for sports betting in the state of Kansas.

SB 84 has been in the making for quite some time, and it was House-approved on April 1. However, it wasn’t until a late session on April 29 that the Kansas Senate finally voted in favor of SB 84, passing with 21-13 votes. It was headed to Governor Kelly’s desk afterward and was quickly signed on May 12, when sports betting in the state of Kansas was officially made lawful.

Brandt Iden, Sportradar’s Head of Government Affairs and a former Michigan State Representative has reportedly said that this move can also bring in outside bettors, including ones from the state of Michigan, commenting that the projected $10 million revenue is probably low, saying that he doesn’t know how much bigger, but “it’ll be a lot bigger.”

The state will be collecting a 10% tax on sports betting revenue, with 80% allotted to a fund, set up to attract major sports teams Governor Kelly said “It allows us to do things like fully fund our schools, fully fund our roads and expand broadband.” There is speculation that this could be part of a plan to attract big names – such as the Kansas City Chiefs – across the state line.

Thanks to the new bill, local casinos will be able to make deals with sports franchises and venues, such as Kansas Speedway or the Sporting Kansas City, and place kiosks at their facility, allowing Kansans to place their bets and support hometown teams while watching the game.

Governor Kelly said “Legalizing sports betting is a common-sense solution that will keep Kansans’ money in Kansas. It’s one more way my Administration is working to make Kansas the most pro-business, pro-growth state in the country,” and all prospects lead to this eventuality. Kansas might be the second state to pass sports betting this year, but it’s definitely the first to do so in the Midwest, “putting Kansas on the map,” as Iden said.