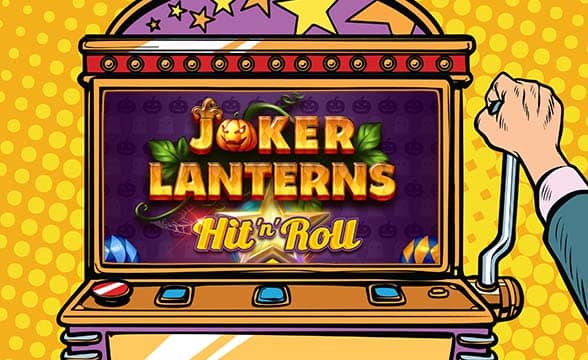 Kalamba Games, an international games studio which provides data-informed slots and casino content, has added a follow up title to its Joker Lanterns slot. The new game is called Joker Lanterns Hit ‘n’ Roll and is an upgraded version of the same spooky title players have grown to love.

The new title will see players collect various fruit symbols, as well as the game’s signature jack-o’-lantern symbols. Various combinations will yield players different monetary awards. The game has 40 paylines and provides gamblers with many ways to win.

In addition, each time players spin the reels, they get a bonus to their Cashpot meter and free spins. When the bonus game is activated and the reel lands on the Cashpot or free spins, players earn the bonus they have accumulated so far. The Cashpot meter has a maximum value of 5.

When players collect three Hit ‘n’ Roll star symbols, the bonus game kicks in. Depending on players’ luck, they can either win a flat monetary prize, the Cashpot prize or free spins. Let’s see what each of those has to offer.

Cash prizes are pretty straightforward – if players get one, they will get the flat sum described on the reel. The Cashpot prize, on the other hand, is affected by the Cashpot multiplier players have accumulated. As a result, they can get up to five times the sum described. Once the Cashpot is unlocked, the multiplier is reset.

Additionally, players can earn free spins and unlock a free spins bonus game. During the bonus, players would spin an enhanced version of the reels that has more beneficial bonuses. If the players collect three star symbols, they get an additional three spins to keep the action going. If they collect Hit ‘n’ Roll pumpkins, players can trigger a HyperBonus feature and earn more free spins or cash.

Kalamba Games’ co-founder and chief operating officer, Alex Cohen, said that Joker Lanterns’ popularity inspired the studio to introduce an upgraded version of the game. He noted that the game has proven to be consistently popular even outside of the Halloween season.

The new Hit ‘n’ Roll mechanics, according to Cohen, will make the game more exciting and fun for the players, thus increasing Joker Lanterns’ entertainment value.