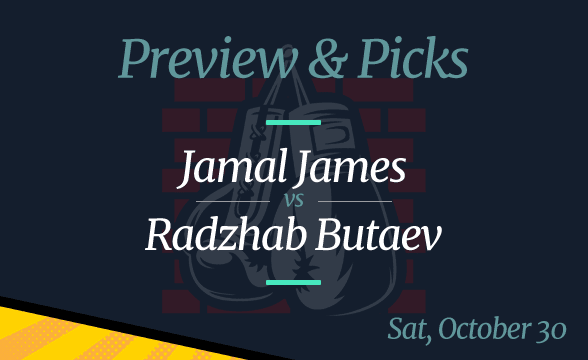 We have another great boxing bout locked in for this Saturday, October 30. The fight between Jamal James vs Radzhab Butaev will be treading the needle as both boxers are posted very closely in DraftKings’ latest odds analysis.

The fight will be broadcast out of Mandalay Bay Resort & Casino in Las Vegas, Nevada on Showtime and the pair will square up for a chance to compete higher in the WBA world welterweight championship. Let’s have a look at the odds and break down both fighters’ accomplishments so far.

What to Expect from James vs Butaev?

Both fighters will be looking to secure a win on Saturday, as they would move up the WBA pecking order. Well, for double J’s it would be a matter of defending his title as he will have to face off Butaev, who is this fight’s challenger.

The WBA World Welterweight Title is a desirable addition to both boxers’ string of successes and we will see a highly contested bout where James is posted at (-115) against Butaev (-105). These odds definitely tell us too much about their careers so far, but their stats do.

James has gone (27-1-0) in professional boxing, making him a formidable fighter. His only loss is to Yordenis Ugas in 2016, but he has bounced back with seven straight victories since then. Losing to Ugas is not really something that undermines James’ credibility as a fighter. Ugas is another significant contender and he has defeated Manny Pacquiao in a recent bout.

However, as both fighters have stood their ground in professional boxing, it’s likely we could see a sequel between the pair. But before this could happen, James would have to take on Butaev and bring it home. Even though the Russian has fewer fights, he has the qualities to deliver home powerful punches and his record has quickly set him apart from the riff-raffs of boxing as a dangerous opponent.

How Come Butaev Is So Dangerous?

While Butaev may only have 13 professional bouts, all of which have been won, he is an outstanding overall fighter precisely because of his amateur career. Butaev has 400 fights to his name as an amateur and this is enough to alarm James.

While technically undefeated, Butaev did have a loss overturned when Alexander Besputin technically won by decision in 2019 but later tested for a performance enhancement drug, which immediately resulted in his forfeiting the win. The oddsmakers themselves are split on this one, giving a slight edge to double J’s here.

Tale of the Tape: James vs Butaev

Betting Pick and Prediction for James vs Butaev

Double J’s does seem like a strong contender here and we feel that he has a good chance of upsetting Butaev’s spotless record. Yet, with 400 amateur fights behind his back, we feel inclined to once again back the underdog here. The fight will be close, and even though, James is very likely to outlast Butaev, we want to give the young ace a shot.

If you have a soft spot for the underdog, back Butaev at -105, but if you feel that professional experience matters far more, then the defending champion is your top choice here.

Scientific Games Agrees to Sell its Lottery to Brookfield for $6B