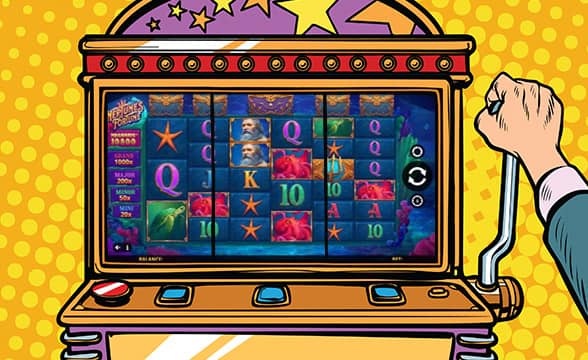 iSoftBet launched Wednesday its latest slot title, Neptune’s Fortune Megaways, a cascading type game with up to 46,656 ways to win.

Neptune’s Fortune Megaways features six reels and up to six rows, offering players 64 to 46,656 ways to win. The cascading video slot immerses players in Neptune’s sunken world, with five treasure chests perched above the reels, ready to be triggered. They offer random win multipliers: x2 to x5, and up to x20 if all four chests open at the same time.

Three to six matching symbols, aligned from left to right only, will let gamblers win big: New symbols will drop over the previous winning combo, allowing players to win multiple times with just one spin.

Pearl clam wilds can trigger two of the game’s features: the four smaller treasure chests or the central purple treasure chest above reel three and reel four, which, once triggered, can award a bonus game. This bonus feature lets players try to find three matching items under 12 pearls, with bonus jackpots multiplying the total bet: Mini at 20x, Minor at 50x, Major at x200 and Grand at 1,000x.

Free spins can be won with four or more Trident Scatter symbols. This mode removes all royal symbols, with wilds and high-paying symbols remaining, making for a lucrative gameplay through Neptune’s constant cascading feature.

Mark Claxton, the operator’s Head of Games, declared that iSoftBet aims to “create amazing gaming experiences” for its partners and their customers. “We have taken this to another level with our range of Megaways games in the last 12 months, listening closely to what players want and presenting them with a series of new and exciting visuals, features, and mechanics within every iSoftBet release,” he added.

iSoftBet currently operates globally in 19 regulated markets and was nominated for various awards, including the Casinogrounds Awards’ Game Provider of 2020, and the Game of the Year and Provider of the Year categories at the BigWinBoard Awards, where it took second place.