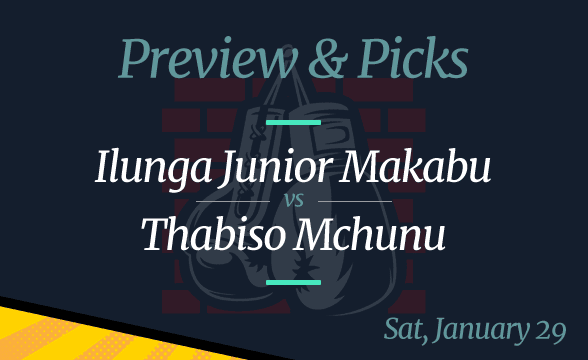 Ilunga Junior Makabu vs Thabiso Mchunu is a battle for the WBC cruiserweight title. The two go toe to toe at Packard Music Hall in Warren, Ohio on Saturday, January 29, 2022.

Makabu is the reigning champ, who won the vacant WBC cruiserweight title in January 2020 against Michal Cieslak. Since then, we saw him defend his title once in December 2020 against Olanrewaju Durodola. More than a year later, it’s time for Makabu to try and defend his championship belt once again.

This time, the challenger is Thabiso Mchunu, a pugilist whom Makabu has already beaten once in his career. It happened in May 2015 when Makabu knocked out his rival.

All odds are per Caesars Sportsbook as of January 27.

Makabu Favored to Defend His Title

The 34-year-old Congolese-South African pugilist is 28-2 in his professional career. His first loss happened in his debut, which happened back in 2008. Makabu’s second defeat happened in 2016 against Tony Bellew when the two fought for the vacant WBC cruiserweight title. Makabu got another shot on the title four years later, but this time, he won it.

Makabu is on a 9-win streak and is expected to add the 10th title to the list. Oddsmakers are giving -180 on the reigning champ, suggesting that he’s very likely to win. Apart from having the skills and experience on his side, Makabu also has the motivation to keep his run going.

There’s a rumor that Makabu could face Canelo Alvarez later in 2022. However, the super-fight would only happen if Makabu’s winning run didn’t end. That said, beating Mchunu is a must for this guy.

Can Mchunu Upset the Odds?

Thabiso Mchunu is 23-5 in his boxing career, with his most recent defeat happening in 2018. That’s when he lost to Thomas Oosthuizen in a fight for the African cruiserweight title. Since then, we saw him winning four fights, including the one against Denis Lebedev that got him the vacant WBC Silver cruiserweight title.

He retained it in the next fight, which happened in March 2021. That’s when he defeated Evgeny Tishchenko. Both of those wins happened by unanimous decision. In fact, six of his previous fights were decided by the judges.

When he fought Makabu the first time, it seemed that the fight would go the distance as well. Mchunu was doing pretty well until Round 11 but then he ended up KO-ed.

This time, however, we could see him staying on his feet until the final bell. Still, even if such a scenario plays out, the judges will probably score Makabu the winner.