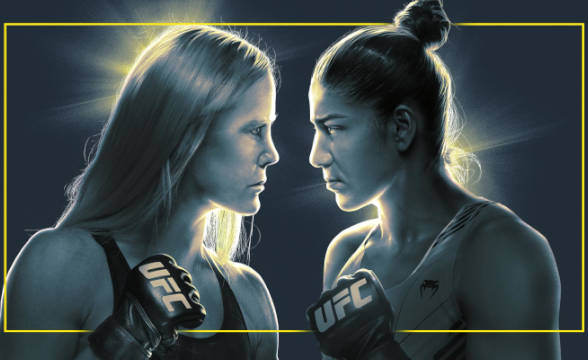 Once again, the UFC is coming to Vegas. The UFC Apex facility in Nevada is the place where UFC Fight Night 206 will take place on Saturday, May 21, 2022. Also known as UFC Fight Night: Holm vs. Vieira, the event will see the return of the former UFC Women’s Bantamweight champion Holly Holm after almost two years’ absence.

The legendary fighter who’s turning 41 this year is expected to win – Holm is priced at -245 by major online sportsbooks. Still, knowing that she’s been struggling with injuries in the recent past and that her opponent Katlen Vieira has been superb lately, one would think that we could see a surprise on Saturday.

To see what we think about the Holm vs. Vieira fight, just keep on reading our UFC preview.

All odds are per FanDuel as of May 18.

Holly Holm is Finally Back

It wouldn’t be an overstatement to call Holly Holm one of the greatest female fighters in the history of the sport. Her career record is 14-5 with seven wins happening in the UFC.

Among those wins is the one that happened in the title bout with Ronda Rousey for the UFC Women’s Bantamweight Championship. The win won her the championship belt as well as the Performance of the Night bonus. The KO win over Rousey is still regarded as one of Holm’s finest performances in her career.

However, that fight happened seven years ago. Since then, we saw her lose five fights while winning four. The good news for her fans is that two of those wins happened in her previous two bouts. The bad news is that those fights happened in 2020 – Holm hasn’t been in the octagon since.

She was supposed to fight twice in 2021, but both times she had to cancel due to health issues. Her fight with Julianna Peña was canceled because of Holm’s problems with kidneys. The fight against Norma Dumont was canceled due to Holm’s knee problems.

Ketlen Vieira to Upset the Odds?

Holm is favored to win this fight, but we think Ketlen Vieira mustn’t be underestimated. She’s ten years younger than her opponent, with no major injury issues troubling her in recent times. Further, Vieira has an impressive record in her professional career with 12 wins and just two losses.

One of those losses happened in 2019 when Irene Aldana KO-ed her at UFC 245. The other loss happened in February 2021 when Yana Kunitskaya beat her by unanimous decision. The fight in question was a catchweight fight in which Vieira missed weight.

This Saturday, she’s back in the bantamweight division, which is her natural weight class. Her most recent fight in this division happened in November 2021 when she beat Miesha Tate by unanimous decision.

Although we understand why Holm is favored by the bookmakers, we do think Vieira stands a decent chance in this fight. She has the skills, as well as the physique needed to beat Holm. Plus, she also has the will to do it as this is arguably the biggest bout of her life.