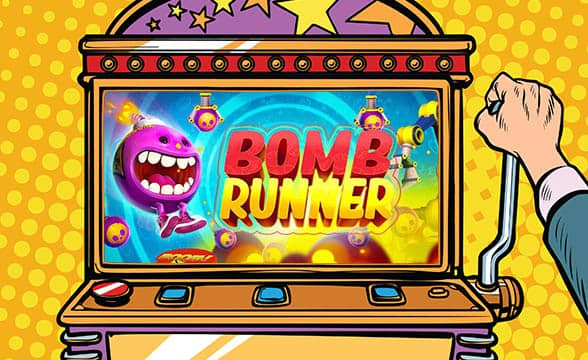 Top-tier table games and slots provider Habanero has launched Bomb Runner, an exciting fresh slot inspired by arcade video games that promise to get the adrenaline pumping on the spot. The news comes as a smooth continuation of Habanero’s spectacular 2021 when the company managed to secure some noteworthy partnerships with Betway and LeoVegas. Last April, Habanero also expanded its global presence by adding Spain to the list of countries it is now available in, thanks to a deal with 888casino. The provider is determined to keep building on the momentum and the new slot that offers a max win of up to 6,235x is definitely one step forward.

Players who remember Bomberman, the popular arcade game that created a genuine craze among video game players in the late 90s and early 00s will have a fun time reminiscing the old title. At the same time, they will also enjoy discovering the cartoonish graphics and vivid design of the new game. Bomb Runner will instantly catch your eyes with its blue background, massive pink Bomb Wild symbol, danger signs, rockets, grenades, nuclear bombs, and the rest of the symbols chosen by the developer.

The game is fast-paced and progressing through it means enjoying an immersive experience offered by the rather unusual 6×5 reel setup and 707 Connected Ways or Lines. Players can form winning combos consisting of as many as six symbols using the 707 Connected Ways. In other words, a winning combo can be formed with the help of symbols that are not directly touching either diagonally or on the horizontal. Provided one of the reels contains a symbol in the first position and the next symbol is placed in the third position, a winning combo will not form through them.

The game’s main feature takes the form of the Bomb Wilds. Up to nine of these symbols can pop up simultaneously and randomly, landing on the reels and triggering a countdown within the game. The countdown will inform players of the number of rounds they will get. Once the countdown goes down to zero, the bomb symbols will start exploding and make wild and adjacent symbols show up in the respective position. The same symbols can also expand to other positions on nearby reels, generating even greater wins and adding more fun to the gameplay.

Habanero’s head of corporate communications Toni Karapetrov expressed the company’s pleasure to announce the launch of the new game that will offer players a “stunning experience” with a rich plethora of vivid colors that will steal all the attention. He also expressed his confidence that the game will completely resonate with seasoned Habanero fans.