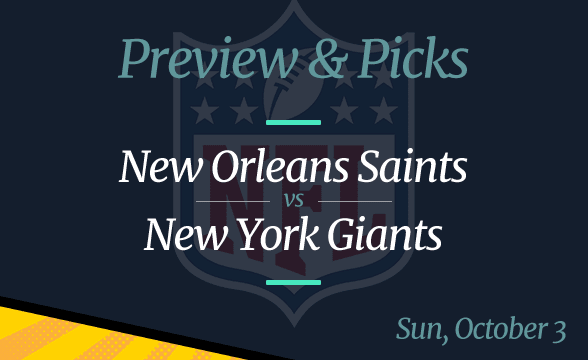 The New Orleans Saints are back at Superdome after Hurricane Ida evacuation. Their first home game of the season was played in Jacksonville, but this time, they’re home. The Saints will have 70,000+ of their fans in the stands on Sunday. Actually, this is going to be the first time the Superdome, now the Caesars Superdome, is working at full capacity since January 2020.

Home advantage isn’t the Saints’ only advantage coming into Week 4. They’re also in much better shape than the New York Giants. New Orleans is 2-1 this season, while the New York-based franchise is still without a single win.

All odds are per DraftKings as of September 29.

Sure, he’s no Drew Brees, but Saints starting QB Jameis Winston has been pretty decent so far. In his three starts in the 2021 season, he’s completed 38 of his 63 passes for 387 yards in total and seven touchdowns.

Winston’s best performance was in Week 1 when the Saints thrashed the Packers 38-3. In that game, he made five TD passes. A week later, he failed to do much, which made his critics start questioning his future at New Orleans. However, in Week 3, he was brilliant once again. Against the Patriots in Foxborough, Winston went 13/21 for 128 yards and two TDs.

Of course, Winston isn’t the only man responsible for the Saints’ offensive brilliance. In fact, with such receivers as Deonte Harris, Marquez Callaway and Juwan Johnson, the QBs job isn’t that difficult.

Then, there’s also RB Alvin Kamara, who’s been fantastic both in rushing and receiving this season.

The Giants Aren’t as Horrible as One Might Think

The Giants are 0-3 ahead of Week 4, with a score differential of 56-74. This makes them one of the worst teams in the league at the moment. However, the truth is that they haven’t been so bad.

In fact, they were unlucky to lose their previous two games. In Week 2, the WFT beat them 30-29, thanks to a field goal in literally the last moment of the game.

Then, in Week 3, they lost to the Atlanta Falcons 17-14. This time, they had an even bigger lead until late in the game. In fact, it was 14-7 for the Giants until 10:47 in the fourth quarter, when the Falcons scored a TD and an extra point. Then, in the last second of the game, the Falcons placekicker Younghoe Koo scored the winning field goal.

Unfortunately for the Giants, their Week 4 opponent is probably even stronger than the teams they faced previously. Plus, this Sunday, they’re playing on the road. What this all means is that the unlucky Giants are heading toward another defeat.

Pick: New Orleans Saints to win, but not cover the spread; we should see the under hit in this game.

Redbet to Cease Operations in the UK from October 27