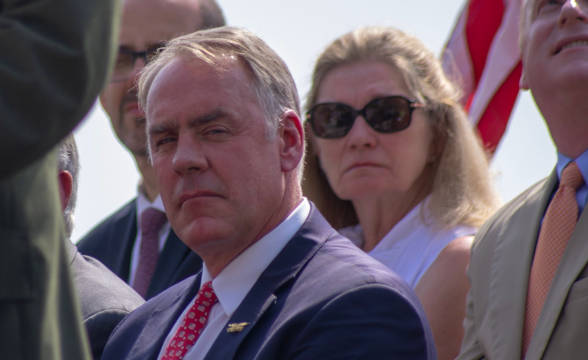 The Interior Department’s inspector general has exposed former US interior secretary of the Donald Trump administration Ryan Zinke of lying to federal investigators and purposefully misleading them regarding how he and his department blocked two Indian tribes from opening a casino in Connecticut.

Associated Press reported that inspector general Mark Greenblatt has revealed in a report that ex-secretary of the interior from the Trump administration, Ryan Zinke, who is currently running for a congressional seat in Montana, intentionally deceived federal investigators regarding his conversations with lobbyists, legislators, and other persons holding public office positions about a proposal from the Mashantucket Pequot and Mohegan tribes of opening a casino in East Windsor, Connecticut.

Federal investigators discovered that both Zinke and Scott Hommel, who served as chief of staff when the decision on the tribal casino was made, deliberately presented the circumstances surrounding their decision inaccurately. The Greenblatt report explicitly stated: “As a result, we concluded that Secretary Zinke and (Hommel) did not comply with their duty of candor when questioned.”

According to the Greenblatt report, the bid from the two tribes was for a casino located just 17 miles from a planned casino in Springfield, Massachusetts developed by MGM Resorts, which opened its doors back in 2018.

Zinke did not do anything about the tribes’ proposal for Connecticut, which required federal approval. He neither rejected it nor approved it but just send it back to the tribes.

Zinke’s lack of action resulted in an investigation from the US Interior Department. The tribes, together with the state of Connecticut, also took legal action against Zinke’s decision stating that it was influenced by improper lobbying from MGM Resorts among others but dropped their lawsuit later on saying they need to focus on their existing casinos.

Zinke Asked for the Report to Be Released After the Elections

Ryan Zinke’s attorney has bashed the report and Zinke himself has questioned its timing calling it “disturbing and improper”. Zinke even asked for the report to be released after the elections.

Greenblatt rejected this request from Zinke on the basis that it would not align with the usual processes of the Interior Department and, additionally, it may be seen as a political purpose.

In response to the report, Zinke’s attorney stated that his client did not make any lobbyist decision regarding the proposal for the tribal casino in Connecticut. The attorney pointed out that Zinke lacked jurisdiction on the matter of the application from the tribes as the casino location was not on tribal lands.