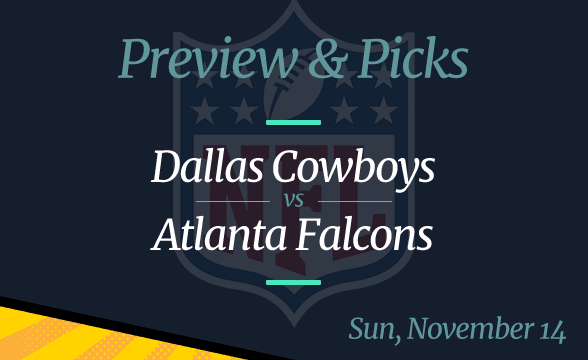 The Dallas Cowboys don’t have to worry much about their playoff future. Unless they mess things up completely, they will finish at the top of the NFC East. Their record is 6-2 and their schedule doesn’t look that ugly.

The same isn’t the case with the Atlanta Falcons, whose only chance of getting to the postseason lies in the Wild Card. They are 4-4 on the season, with three wins in the previous four weeks. Let’s see if they can add another win to the list!

All odds are per DraftKings as of November 9.

Last Sunday, the Falcons earned themselves their fourth win of the season when they beat the New Orleans Saints 27-25. It was a close game, but that doesn’t take anything away from Atlanta. Beating the Saints in Louisiana is a great achievement on its own. Plus, the fact is that the Falcons entered the game as a 7-point underdog.

Despite playing one of the NFC’s best defenses, the Falcons managed to score 27 points. It’s mostly thanks to their quarterback Matt Ryan, who threw for a season-high 343 passing yards and two touchdowns, without a single interception. On top of that, the QB made five carries and scored one rushing touchdown.

The Cowboys’ superb run of six straight wins ended last Sunday when they lost to the Denver Broncos 30-16 at home. Dallas’ defense had no takeaways in the game, allowing a total of 407 yards to the Broncos.

That was their worst defensive display since the season opener against the Tampa Bay Buccaneers when they lost 31-29.

According to their defensive coordinator Dan Quinn, the Cowboys need to fix some defensive issues. The man who spent over five seasons as the head coach of the Falcons doesn’t seem worried about the Week 10 game. Instead, he suggested in an interview that his team needs to focus on the defense.

Apart from performing badly in the defense, the Cowboys also failed to do much in the offense. This goes especially for their quarterback Dak Prescott who completed only 19 of his 39 passes. With a 48.7% pass completion had his worst game of the season. In comparison, his second-worst pass completion rate of 2021 was 63.64% in the Week 4 clash with the Carolina Panthers.

Knowing how much talent the Cowboys have on their roster, it’s very likely that they’re going to improve their form in Week 10. Still, covering the 9-point spread seems unlikely.

Pick: Dallas Cowboys to win but not cover the spread; over will probably hit this time.