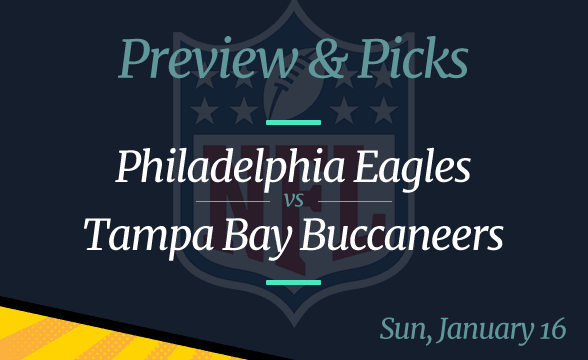 The reigning NFL champions, the Tampa Bay Buccaneers finished as the #2 team in the National Football Conference Rankings. As a result, they get to play the Wild Card playoff game against the lowest-seeded NFC team that made the playoffs. The team in question is the Philadelphia Eagles.

The two have already met once this season. It happened in October when the Bucs beat the Birds at Lincoln Financial Field in Philly. This time, the Eagles vs Buccaneers game is taking place at Raymond James Stadium in Tampa. On their turf, the Bucs are 7-1 this season, which explains why online sportsbooks expect an easy win for Brady & Co. on Sunday afternoon.

Actually, the big question ahead of the Eagles vs Buccaneers Wild Card game isn’t whether the hosts can win. Instead, it’s whether they can cover the nine-point spread?

All odds are per FanDuel as of January 12.

The Eagles to Go All-In

It’s very likely that the Eagles are going to treat this game as their own Super Bowl. The matchup on Sunday is their most important game of the season. If they, somehow, manage to win, it would mean achieving their goal.

Evidence of this is that their coach Nick Sirianni decided to give his key men some rest in the final week of the regular season. With backups on the field, the Eagles ended up ripped apart by the Dallas Cowboys in Week 18. The score was 51-26 for the visiting team, which is Philly’s worst loss of the season.

The Bucs are Worried About Their Receivers

Tampa is seriously undermanned in the wide receiver position. Their problems started about a month ago when Chris Godwin suffered a season-ending ACL injury. Then, Antonio Brown’s antics in the game with the New York Jets caused the Bucs’ management to release him from the team.

As all that wasn’t enough, Cyril Grayson suffered an injury in the Week 18 game against the Carolina Panthers. The game also saw the Bucs’ record-breaking WR Mike Evans exit the field with an arm injury. The man who broke the franchise record for most receiving touchdowns in a season returned after receiving treatment and is cleared to play in the Wild Card game.

However, Evans probably isn’t going to be at his 100%, the reason being that even before the Week 18 injury, he was struggling with fitness. As per Tampa’s injury report from last Wednesday, the problem was his hamstring.

Nevertheless, even with problems in their receiving section, the Bucs still have plenty of offensive weapons. They should have no problems beating the Eagles, but their job might not be as easy as the bookies expect. Instead of seeing a blowout win for Tom Brady and Co., we could see the Bucs fail to cover the spread.

Picks: Tampa Bay Buccaneers to win but not cover the spread; under will probably hit