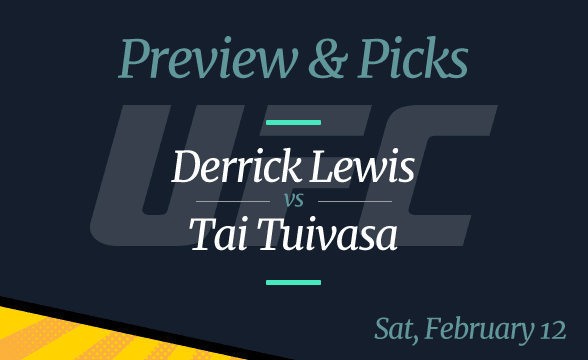 UFC 271 brings MMA fans a number of reasons to be happy. First of all, there’s the headliner fight between Israel Adesanya vs Robert Whittaker. Then, there’s the clash between Derrick Lewis and Tai Tuivasa which serves as the co-main event.

That’s the fight that we’ll focus on in this preview, analyzing the betting odds, discussing the stats, and providing picks along the way.

All odds are per FanDuel as of February 10.

“The Black Beast” Looking for Another KO Win

Derrick Lewis a.k.a. The Black Beast is a two-time UFC title challenger who’s currently ranked third in the heavyweight rankings.

Last Monday, he turned 37, meaning that he has plenty of experience in the MMA universe. In fact, Lewis started his pro career back in 2010, while his UFC journey started four years later.

So far, Lewis has fought 35 professional fights. Twenty-six of those, he won, while losing just eight. His most recent loss happened in August 2021 when he lost by technical knockout to Cyril Gane in the fight for the UFC Heavyweight Championship.

Lewis bounced back from the loss a few months later. It was December 2021 when he won against Chris Daukaus. Apart from bringing him back on the winning track, that fight’s important for another reason. Lewis defeated his opponent by knockout, thus breaking the promotion’s record for most knockout wins. Ahead of UFC 271, Lewis has 21 KO wins.

Nine years Lewis’ junior, Tai Tuivasa has fought 16 professional MMA fights in his career, ten of which happened under the banner of the UFC. After an impressive start of his UFC adventure with three straight wins, Tuivasa hit a rough patch in 2018-19 – we saw him lose three fights in a row.

However, since late 2019, he’s been on a roll. Tuivasa went on to win four fights, thus climbing in the heavyweight rankings. Ahead of the fight with Lewis, he’s sitting in the #11 place.

Among the reasons why he got a chance to fight such a big opponent is the fact that in both of his previous two fights, he earned the Performance of the Night bonus.

The bad news for Tuivasa is that something similar probably isn’t going to happen this Saturday. It’s because this time, he’s facing the toughest challenge of his career.