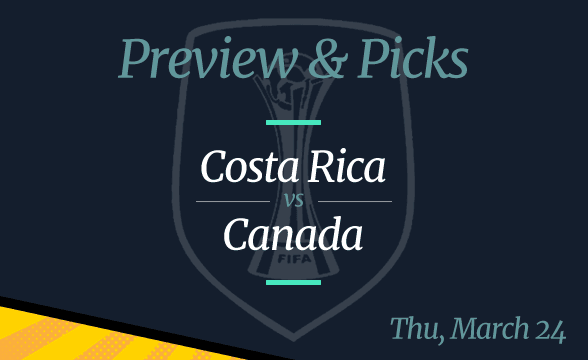 Canada is the only team from the CONCACAF zone that’s already booked the ticket to the 2022 World Cup. With 25 points after 11 rounds, Canada will stay in the top 3 no matter what happens in the remaining three qualifiers. The same doesn’t apply to its next opponent.

Costa Rica is currently in the #5 position in the World Cup qualification table, with one spot behind #4 Panama. If this team manages to get to that spot, Costa Rica would get to play the International Playoffs against a team from Oceania.

The bad news for Costa Rica is that its remaining three World Cup qualifiers are all against pretty tough opponents – Canada, El Salvador, and the United States.

The good news for this team is that those three probably aren’t going to be too motivated. The reason is that Canada and United States are almost certainly going to qualify for the World Cup, regardless of how they play against Costa Rica. Meanwhile, El Salvador has zero chance of getting to Qatar no matter what happens in the remainder of the season.

Another advantage for Costa Rica is that its players have been in top shape over the last couple of months. Evidence of this is that they’re without a loss in four international matches, with three wins and one draw.

What should worry them is that the last time they lost a game, their opponent was Canada. It happened last November when a goal by Jonathan David won all three points for Canada.

Canada Close to Securing the #1 Position in CONCACAF

With four points more than the USMNT and Mexico, and with just three games left to play in the 2022 FIFA World Cup Qualifiers, Canada is very likely to stay at the top of the standings. Actually, this team could secure the #1 by the end of the week.

For that to happen, Canada just needs to keep on playing as great as usual. And these guys have really been terrific during the qualification campaign. Canada is the only undefeated team in the CONCACAF qualifier with a 7-4-0 record and a score difference of 19-5.

Canadians might not be as motivated to win as Costa Rica, but with players like Jonathan David, Cyle Larin, Atiba Hutchinson, and others, they can definitely make this game interesting.

The home team should win this game. After all, Costa Rica needs it much more than Canada. Still, we are probably going to see a real thriller on the pitch of Estadio Nacional de Costa Rica as Canada’s players are playing fabulous soccer in 2022. That said, goals galore seem guaranteed.