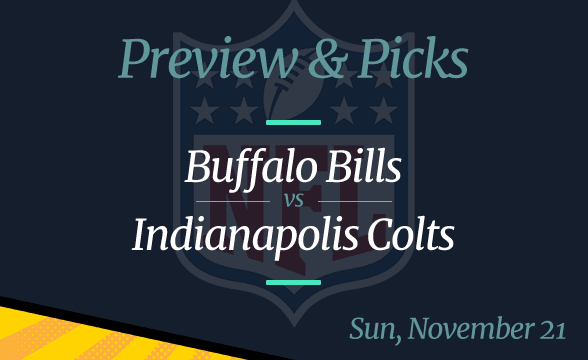 The Buffalo Bills got their sixth win of the season when they destroyed the New York Jets 45-17 on Sunday. Meanwhile, their Week 11 rivals, the Indianapolis Colts, beat the Jacksonville Jaguars, thus getting to a .500 record.

The win over their AFC South nemesis was the Colts’ fifth win of the season, as well as their second in November. Can they add another one to the list? Oddsmakers say no. instead, they’ve given the role of the favorite to Buffalo.

All odds are per DraftKings as of November 15.

Indianapolis is 5-5 in 2021, which isn’t a bad record. However, it seems that there’s no way we’ll see them winning the division. The thing is that the Tennessee Titans are already 8-2. Nevertheless, the Colts still have a pretty good chance to get to the playoffs via Wild Card.

For that to happen, they just need to continue playing good football. After going 0-3 at the start of the season, they went on a superb run, winning five of the following seven games. Further, the two games they lost in that period, they lost after overtime.

Their offense has been sensational in recent weeks. Actually, with 33 points on average in the past three games, they have the most in-form offense in the league.

Their quarterback, Carson Wentz, made 2+ touchdown passes in seven of the ten games he played in this season. However, he’s not their most impressive player in 2021. Instead, it’s running back Jonathan Taylor.

The guy’s already scored nine rushing touchdowns, which makes him the second-best RB in the AFC (behind Derrick Henry). What’s even more impressive about Taylor is that we’ve seen him scoring at least one touchdown in each of the previous six games.

Bills Return to Their Winning Ways

In Week 9, we witnessed probably the biggest upset of the 2021 season – the Jaguars beat the Bills 9-6 in a game in which QB Josh Allen had no TD passes.

The Bills’ signal-caller bounced back in Week 10, going 21-for-28 for 366 passing yards and two touchdowns. Thanks to his input, the Bills were able to destroy the Jets 45-17 – their best offensive performance of the season.

In Week 11, it’s not their offense they should worry about; it’s their defense. If the Bills’ defense manages to stop the Colts’ rushing plays, they will win. So, can they do it?

Judging by what we’ve seen from them so far, the answer is yes. This team has conceded only 135 points so far, which makes their average 15.0 points, which is the best in the entire league.

We did, however, see them struggling against the teams that really on rushing. The game with the Titans is probably the best example. The Bills did win 34-31, but all four touchdowns they conceded in that game were rushing TD’s.

What all this means is that the Bills could end up having big problems to beat the Colts on Sunday. They will probably do it, but it’s very likely that we’re not going to witness a blowout win.

Picks: Buffalo Bills to win but not cover the spread; over to hit.