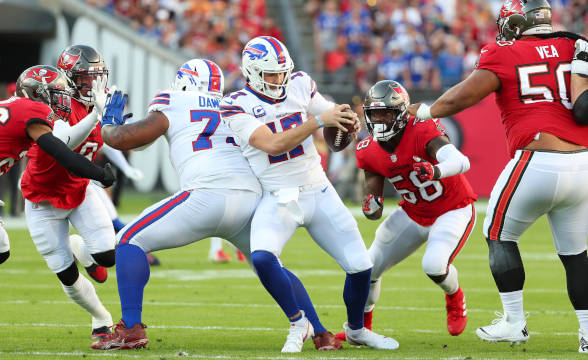 SoFi Stadium is where the Los Angeles Rams wrapped up the previous NFL season by winning the Super Bowl LVI. The same venue is where Sean McVay’s boys start their 2022 NFL campaign – the Rams take on the Buffalo Bills in the first game of the season.

Thursday, September 8 is when the Bills vs Rams game is to be played, which could turn out to be the most interesting game of Week 1. The reason is that this is a clash between last season’s Super Bowl winners and a team that’s the no.1 favorite to win the Lombardi this season.

Oddsmakers think the Los Angeles Rams are going to lose the 2022 season opener to the Bills. The same, however, wasn’t the case when the markets opened a couple of months ago. So, what’s changed since?

Although the Rams’ roster remains as strong as it was during the Lombardi Trophy-winning season, these guys need to worry about their passing game. The thing is that their quarterback Matt Stafford might be carrying a nasty elbow injury.

That was the reason why Stafford missed most of the offseason training, only returning to practice a couple of weeks before the season kick-off. However, according to coach McVay, there’s no cause for concern. In a recent interview, the coach revealed that the QB threw the ball more than 75 times during a training session last week.

Unfortunately for the Rams fans, they also got some problems on the receiving end. With Odell Beckham Jr. leaving in free agency and Robert Woods moving to Tennessee, the Rams don’t have too many quality backups for their top wide receiver, Cooper Kupp. But they got him and he’s gonna cause a lot of headaches to the Bills on Thursday.

Bookmakers Predict a Wonderful Season for the Bills

Matt Stafford’s elbow problem is one of the reasons why the Rams are seen as underdogs in Week 1’s game with Buffalo. Another reason for that is that the Bills look really good ahead of the start of the 2022 season.

They might be the most well-rounded bunch of all the teams competing in the NFL in 2022. Their arguably best player is their quarterback Josh Allen, but they got some amazing players in practically all positions on the field.

Their offensive linemen should be good enough to protect Allen, although there’s always fear that the Rams’ bulldozer Aaron Donald might break through. When it comes to the Bills’ defense, they now got ex-Rams outside linebacker Von Miller to help out with pass rushing. Further, cornerback Tre’Davious White is back to 100% fitness after an injury-plagued season, meaning that the Bills might have what it takes to solve the Cooper Kupp puzzle.

In 2022, the Buffalo Bills are better than the Los Angeles Rams. The men in blue-and-yellow do have some real superstars on the roster, but the Bills should be able to outplay them.

Pick: Buffalo Bills to win and cover the 1-point spread; under 52.5 points